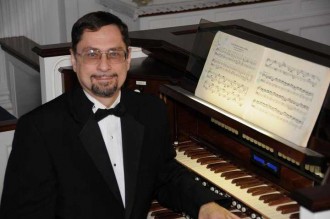 University Organist and Adjunct Professor of Organ Karl Schrock is a musician of broad training and experience:

As university professor, he has taught organ, harpsichord, accompanying, keyboard for choral conductors, choral ensembles, instrumental and mixed ensembles, choral literature, tonal theory, aural skills, figured bass, form and analysis, analysis for conductors, and music history, and served as rehearsal accompanist/assistant conductor of choral ensembles. He has served as visiting faculty at the University of Michigan and previously taught music at Kalamazoo College and the Washington School of Ballet.

As organ soloist, he has performed in Europe and South America as well as many States, given European and American premieres and made commercial recordings at the invitation of composers Emmanuel Dubois and Theo Morrison, and been heard nationally on Pipedreams.

As organ accompanist, Schrock has performed solo accompaniments of large choral works from all historical eras.

As collaborative keyboardist, he has performed on continuo and large organ, harpsichord, harmonium, and piano with professional orchestras and choral ensembles, university orchestras and symphonic bands, School of Music choirs, community and church choirs, and vocal and instrumental soloists.

As professional singer, Schrock toured as tenor with the Paul Hill Chorale and appeared elsewhere in major works as countertenor, tenor, baritone, and bass soloist.

As church musician, Karl is an ordained minister and served as organist and music director in various denominations.

As organ consultant, he helped design and inaugurate one of the largest and finest mechanical-action instruments in Michigan: the 54-stop Létourneau Opus 55 at First Baptist of Kalamazoo featured in the December 1998 issue of The American Organist, and while Music Minister at Fountain Street Church in Grand Rapids, Michigan, he inaugurated a new five-manual, 179-stop organ that was the cover feature of The American Organist for November 2004.

As Michigan resident, Schrock served five terms as Dean of the Southwest Michigan Chapter of the American Guild of Organists, and his professional work was featured in the April 2003 issue of Encore magazine.

As a student, Karl earned national recognition for accomplishments in Spanish, speech, and mathematics, and later for highest score on the American Guild of Organists Associateship Examination.

As a person, his interests include hobbies as diverse as German crossword puzzles, composing liturgical psalms, traveling to visit friends in Europe and America, and maintaining supportive relationships with younger musicians. He is Papa to a few alumni and Uncle Karl to sixteen persons including several professional musicians. He lives in Kalamazoo in a house with a piano, a five-rank pipe organ, and a reed organ inherited from his grandmother.