Sara and Daryl Huinink’s 2-year-old daughter suddenly halted outside the building that houses WMU’s Unified Clinics. Her eyes swept her surroundings as though she were encountering the world for the first time.

In life-changing ways, the little girl was taking in her world as never before.

Newly fitted with tiny pink hearing aids embedded with glitter, Karys Huinink was finally experiencing a full range of sound on that late summer day more than two years ago.

“She had this look of amazement on her face,” Sara recalls of her always-spunky daughter frozen in place. “She literally stopped and looked around, and when you stop and listen, you hear the birds, the wind, the cars driving by.”

It was an unforgettable moment.

Along with the joy of knowing their daughter could hear was relief that they had found a patient-focused audiologist and one who would be there for Karys’ ongoing needs in the years ahead, including to address vocabulary and language deficits through aural rehabilitation.

WMU’s Van Riper Hearing Clinic is one of 10 WMU outpatient clinics known collectively as the Unified Clinics. They operate under the auspices of the College of Health and Human Services, giving students hands-on clinical experience and the community at-large a group practice that offers specialty clinics.

Last year alone, audiologists and student practitioners in the WMU hearing clinic treated more than 2,000 patients in southwest Michigan, from newborns to centenarians.

“We do the diagnosis, fit the hearing aid and then provide rehabilitation after the fitting of the hearing aid,” says Dr. Teresa Crumpton, the clinic’s coordinator of audiology and Karys’ audiologist.

The clinic’s audiology rehabilitation services are what set WMU’s clinic apart from other hearing centers.

“Aural rehabilitation looks at the impact of the hearing loss and tries to close the gap between chronological age and vocabulary, language and listening age,” she explains.

But to the Huininks, WMU’s audiology services are distinctive because of the high level of personal care they first heard about and then experienced for themselves.

That distinctive care has included the quick turnaround getting Karys’ hearing aids and treatment, clinical staff’s efforts to tap into grants to help with some of the financial strain that can come with acquiring hearing aids, and providing the parents with insight about the genetic condition behind their daughter’s hearing loss.

A fellow church member whose child was a patient at WMU’s hearing clinic suggested they contact Crumpton. 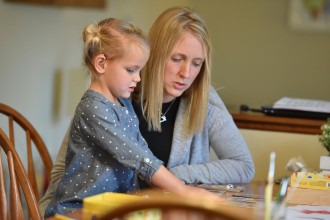 “In a matter of weeks, (Karys) had her hearing aids and molds and everything done,” Daryl says.

The couple still tears up watching the video capturing their daughter’s reaction when her hearing aids were installed. The girl’s expression is one of awe as she listens, experiencing greater clarity and volume, to her dad’s, mom’s and Crumpton’s voices.

When Karys was born, she failed hearing tests in the hospital just like the Huininks’ first two children. But with each child, Sara says, she was told not to worry because newborns may fail screening in the hospital due to fluid in their ears.

That seemed to be the case with Karys, who, just as her older siblings, went on to pass a subsequent hearing screening after leaving the hospital.

But Karys was “super fussy” during that later testing.

“I walked away feeling like, ‘That didn’t feel right,’” Sara says. “But, I thought, ‘They said she passed. They wouldn’t tell me she passed if she didn’t pass.’”

As they watched Karys grow, the couple noticed she didn’t speak much, though their other children spoke early and were talkative.

Their Karys was not a talker, Sara says, “but she had a totally different personality than our other kids, too. So, I thought, ‘She’s just different.’”

Also allaying concerns: The accounts of other parents who spoke of late-talking kids and a pediatrician who advised that as long as Karys was speaking five to 10 words, not to worry. Karys did have a handful of words, and her vocabulary continued to increase in the months that followed her pediatrician’s counsel. And she reacted to sound—her parents’ voices, for instance—but not always.

Often, Crumpton says, babies can seem to parents to be hearing normally when they are not. Almost all U.S. newborns are screened for hearing at birth, but, unlike the Huininks’ children, only about half get the recommended follow-up screening.

“If a baby has mild hearing loss, the baby can appear to be hearing normally because the parents are holding them close,” Crumpton explains. “And the other thing is that most of the responses of a newborn baby to sound are purely reflexes. They might appear to startle. They might appear to eye blink. But that does not tell you that a baby’s hearing is normal.” 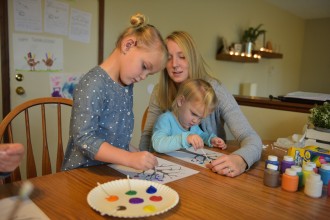 Four-year-old Karys Huinink, left, experienced a whole new world when she received her hearing aids. Karys is pictured with her sister Jozina and mom, Sara.

When Karys was 2, the Huininks decided to pursue another hearing screening to quell their lingering doubts once and for all.

She failed the test, but ultimately got the help she needed at WMU, including an aural rehabilitation regimen that has helped the now-4-year-old advance in vocabulary and language.

“When I run into other people with hearing loss, I sing the praises of this place, because it’s just been so beneficial to us,” Daryl says.

“I don’t know that holistic is the right word for it, but it’s family-centered. Dr. Crumpton cares about us. And she cares about our other kids. She takes the time.”