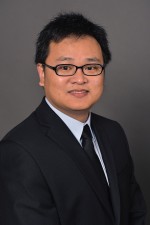 Dr. Hexu Liu has been appointed as an Assistant Professor starting in Aug. 2018 in the Department of Civil and Construction Engineering at Western Michigan University. Prior to this, Dr. Liu worked as post-doctoral fellow with the Natural Sciences and Engineering Research Council (NSERC)–Industrial Research Chair (IRC) in the Industrialization of Building Construction at University of Alberta for two years. He received his Bachelor's and Master's degrees in Shaanxi, China in 2008 and 2011, respectively, as well as a PhD degree with the specialization of Construction Engineering and Management from the University of Alberta in 2016.