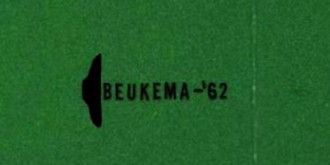 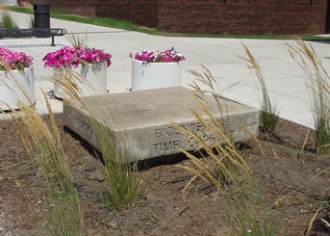 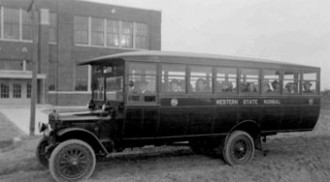 Throughout the years, the goals and needs of Western Michigan University have changed tremendously. The evolution of transportation on campus is as a result of these changing needs, from delivering teachers in-training to rural schools to the vast transit services provided today.

Taken from the flyleaves of the book: 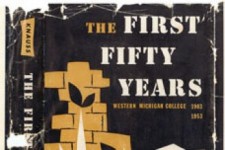 "The history of Western Michigan College, although brief, has been an eventful period, filled with a spirit of growth which shows through all phases of its existence. Despite its recent and humble origins, it has been a history packed with outstanding personalities, devoted people giving their very lives for the furtherance of the education of America's young people. It is of such things that Dr. James O. Knauss writes in 'The First Fifty Years.'

This new volume follows the growing pains from the tiny normal school at Kalamazoo up until the time it has become a great college of education, one of the largest and most prominent in the United States. But perhaps the story is best told in the many persons who have served on its faculty and have fostered the many ideas from which the school drew nourishment. It is a thrilling story of American opportunity and of the forward looking attitude which has pervaded its officialdom, its teachers and its students.

Dr. Knauss traces both the physical and the spiritual growth of the school with a careful pen, noting those little incidents in the eyes of history which meant so much at the time, the many bricks which go to make a great building. This is a story of vision and of service, of an idea for the improvement of education for the young people of America and for improving the teachers sent forth to its many schools and a story of devotion to an ideal which would not be swayed over 50 years of time." 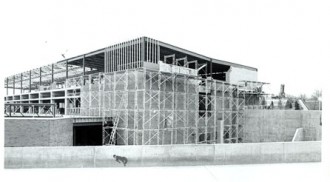 The College of Fine Arts facility was built to house the departments of music and dance. Dorothy Upjohn Dalton was a prominent community figure and energetic proponent of the arts. She served on the WMU Board of Trustees from 1964 to 1972. The $16,230,000 project was completed in 1980. 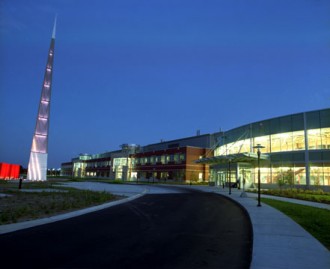 Designed by Rosetti Architects of Birmingham, Michigan, the icon serves as a focal point and anchor to the College of Engineering building and campus. On the plaza, a stylized Kalamazoo River flows toward the icon's base. The rectangular notch or keyhole in the red wall provides a glimpse of the base and the building behind it from the entrance to the College Circle roadway. The wall itself has the potential for future displays, such as a graphical history of engineering.

The icon is lit from within by a series of fixtures in the metal-mesh covered middle section. The lights are programmable and regularly provide interesting displays for the campus community.

The Kalamazoo Regional Psychiatric Hospital has existed continuously at the Oakland Drive location since 1859. The Michigan Asylum for the Insane and Asylum Avenue were the original names of the place and the road.

The Michigan system of asylums was designed to be self-supporting with all manner of in-house industries and services providing food, clothing and other necessities for staff and patients. Most of these functions were located on the asylum grounds or nearby in the community. 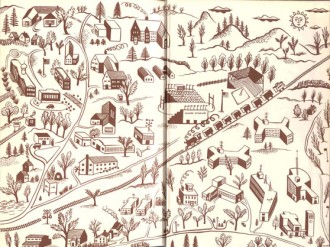 John Kemper's design for the end papers of "The First Fifty Years" by Dr. James O. Knauss. Click to enlarge

John G. Kemper (1909-1991) was a faculty in the Art Department from 1942 until his retirement in 1970. A graphic designer by profession, he provided Western with over 300 designs for such things as posters, plaques and brochures. His design is still the official seal for the University. Prior to his death, he endowed a Medallion Scholarship that was awarded from 1990-91 through 1993-94.

The drawing on the right, by John G. Kemper, gives the viewer a snapshot-in-time of Western Michigan College in the early 1950s. West Michigan Avenue is along the lower edge of the drawing (north is "down", south is "up"), while the railroad tracks and U.S. 12 (Stadium Drive) cut across it on the diagonal. At the very top are Walwood Hall, the Little Theatre and Spindler Hall, separated by Oakland Drive which runs down to meet U.S. 12.

In the details we see an airplane next to the Industrial Arts and Mechanical Trades Buildings where students learned aircraft mechanics and where, during World War II, naval cadets received ground and flight instruction. Antennae atop McCracken (science) and Maybee (music) Halls give a hint to the programs offered within. The far right edge of the drawing depicts Vande Geissen Road and the Gateway Golf Course. 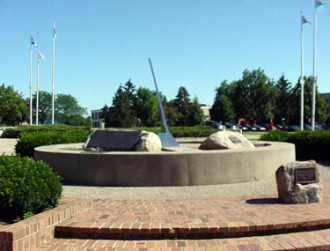 In 1987, the sundial on the pedestrian mall between Kanley Chapel and Wood Hall was named for Haym Kruglak by action of the WMU Board of Trustees. Kruglak initiated and coordinated the creation of the sundial. He and David Martin, a former physical plant mechanical engineer, designed the timepiece, which measures 20-feet in diameter and has a 12-foot stainless steel gnomon, or arm.

Kruglak also designed an unusual sundial that uses people to cast the shadow to tell the time. That sundial is in front of the Kalamazoo Valley Museum in downtown Kalamazoo.

Kruglak authored three books and more than 100 journal articles, research reports and laboratory manuals. Following his retirement from WMU, Kruglak was a visiting scientist at the University of Arizona, where he and his wife of 60 years, Mary Lee, spent the winter months. They also retained a Kalamazoo residence. 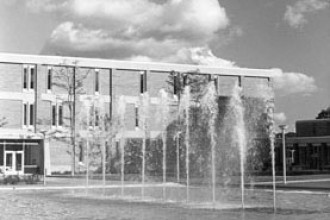 The University Auditorium and the Liberal Arts Complex—Brown Hall, Sprau Tower and Shaw Theatre—were dedicated in 1968 in grand opening ceremonies and performances. The auditorium was renamed Miller Auditorium in 1974.

The Shaw Theatre was renovated and added to in 1994. The expanded building was named the Gilmore Theatre Complex. Shaw Theatre remained the name of the largest performance space in the building. 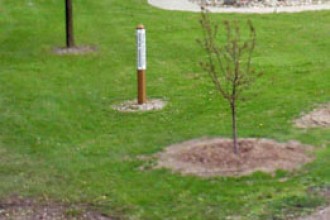 Two peace poles were installed on the Western Michigan University campus in 2004, with the motto "may peace prevail on earth". The poles were a result of a collaborative effort between the Western Student Association, the office of the Vice President for Business and Finance, the Kalamazoo Non-violent Opponents to War, the Muslim Student Association and the Progressive Student Alliance. With an indefinite lifespan, the permanent poles will stand as a beacon of reality reminding us of our vital role as young leaders in a changing and ever-malleable world. 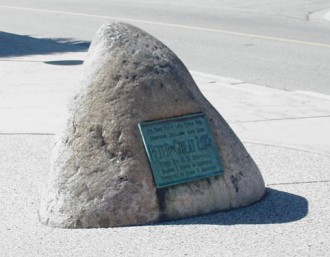 Peter the Great was an internationally known harness racing champion in the 1890s, bred and raised on the Streeter farm in Kalamazoo. The Oaklands, the Italianate building near the Seibert Administration Building, was the Streeter family residence. The home and property were acquired by the University as part of the large property purchase in 1944. The boulder and plaque honoring Peter the Great is located next to Seibert Administration Building, on the northwest side of the building. 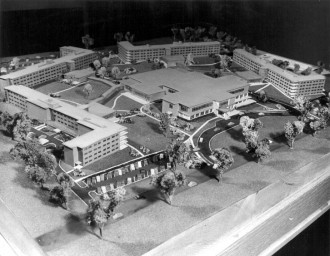 Western's first construction project on the north side of West Michigan Avenue was the Student Center, which would replace Walwood Union as the social center of campus, and four residence halls. A unique feature of this building group were the enclosed corridors, known as "food tubes", connecting the buildings with the dining halls on the north side of the center. One large kitchen for all four dining halls was also located in the center. The south side of the Student Center contained all the public and commercial spaces, including a cafeteria, offices, meeting rooms, a bowling alley and a barber shop. 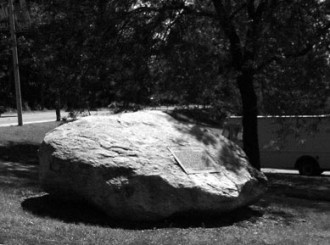 This granite-gneiss boulder weighing 32 tons is a glacial deposit. Originally it was located by the roadside of U. S. Highway 131 about halfway between Plainwell and Kalamazoo. The first president of the college, Dwight B. Waldo, as a boy lived near Plainwell and always admired the rock. He often expressed a desire that it be brought to the campus. Eventually the Kalamazoo Alumni Men's Club undertook the difficult task of transporting the rock, and the work was completed in 1944. It rests here as a mark of loyalty to the college and devotion to its first president.

The boulder is located in a parking lot on the east side of the Physical Plant, adjacent to Eddie's Lane, between Stadium Drive and Oakland Drive.

Since its construction in 1958, the Waldo Library has undergone two major renovations, in 1967 and in 1991. Each project almost doubled the total area of the building; in 1967 the library went from 86,000 to 150,000 gross square feet, and in 1991 it increased to 262,000 gross square feet. The plan to the right illustrates the original building layout and functions.

The name "Walwood" was created by combining the names of Dwight Waldo, President, with Leslie Wood, head of Geology Department. Walwood Hall and Walwood Place were each named after these prominent Western figures.

By the time the Training School building (housing grades K through 8) was completed in 1909, Western-related activities were highly visible throughout the area. Tennis courts and athletic fields were constructed and the cable car and tracks were added in 1908. Training School students enjoyed playgrounds and gardens, many of which were located in the yards of the faculty residences on Walwood Place, just south of the Training School. The Walwood Place houses were in continuous use through the 1960s.

Written by Leo C. Stine, Professor Emeritus of Political Science at Western Michigan University, this book chronicles the 25 years since the University's 50th anniversary. Stine was an excellent candidate to write the book, because he was first hired in 1952, when the institution was celebrating its 50th year in existence, meaning his service at the time spanned exactly the entire 25 year period covered in the book.