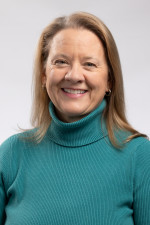 Dr. Janet S. Hahn is the coordinator of the Western Michigan University Gerontology and Healthcare Services and Sciences programs, with an appointment as Faculty Specialist II in the School of Interdisciplinary Health Programs. She earned her Ph.D. in sociology from the University of Minnesota in 1992 and her bachelor's degree in psychology and sociology from Kalamazoo College in 1982.

Her interest in gerontology began when she was an undergraduate and continued with her training as a recipient of a National Institutes of Health Pre-Doctoral Traineeship through the Midwest Council for Social Research in Aging from 1984 to 1987. Her career has focused on aging and geriatric issues in both public and private organizations. Her research focuses on respect for older individuals in need of long-term care as well as the quality of health care.

Hahn has been actively involved in research and evaluation, most recently serving as the senior outcomes research manager for Spectrum Health in Grand Rapids, Mich. Prior to that, she served as coordinator of the Midwestern Geriatric Education Center and assistant professor in the physician assistant program at Midwestern University. She held research and leadership roles at the Joint Commission on Accreditation of Healthcare Organizations and leadership roles at several geriatric-related organizations.

Her professional service includes leadership roles at the Academy of Gerontology in Higher Education, Gerontological Society of America, Illinois Department on Aging and Illinois Office of Mental Health Systems Integration Task Force, and National Association of Geriatric Education Centers. She served as chair of the Ethnogeriatrics Task Force of the National Association of Geriatric Education Center from 2003 to 2005 and convener of the Alzheimer's Disease Research Interest Group of the Gerontological Society of America from 2002 to 2004.

Hahn has published a number of professional articles (including with former last name, Severance). These have appeared in the Journal of Community Health Nursing, Evaluation and the Health Professions, Seniors Housing and Care Journal, Gerontology and Geriatrics Education, Southwest Journal on Aging, Caring Magazine, The American Journal of Alzheimer's Care Facilities and Related Disorders Research, and Sociological Quarterly.

Hahn was principal investigator in the Illinois Department of Public Health's Describing Culture Change in Illinois Nursing Homes, coordinator and co-author of Physician Assistant Geriatric Education Enhancement Project and coordinator of The Midwestern Geriatric Education Center, funded by the Health Resources and Service Administration, Department of Health and Human Services. She has also held numerous contracts as an independent evaluation research consultant focusing on the evaluation of aging services. At WMU Hahn has been PI of two large grants with the State of Michigan. One project focused on behavior analysis with individuals with neurocognitive impairment and another focused on compliance and ethics training for skilled nursing facilities in Michigan.