In this talk,award-winning poet and critic Kevin Young tours us through a rogue’s gallery of hoaxers, plagiarists, forgers and fakers―from the humbug of P. T. Barnum and Edgar Allan Poe to the unrepentant bunk of JT LeRoy and Donald J. Trump. Bunk traces the history of the hoax as a peculiarly American phenomenon, examining what motivates hucksters and makes the rest of us so gullible. Disturbingly, Young finds that fakery is woven from stereotype and suspicion, race being the most insidious American hoax of all. He chronicles how Barnum came to fame by displaying figures like Joice Heth, a black woman whom he pretended was the 161-year-old nursemaid to George Washington, and What Is It?, an African American man Barnum professed was a newly discovered missing link in evolution. 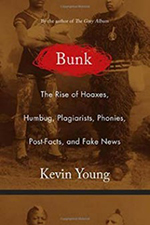 From 2005-16, Young served as Curator of the Raymond Danowski Poetry Library—a 75,000-volume collection of rare and modern poetry housed at Emory University. In 2008, he was also named Curator of Literary Collections. Named University Distinguished Professor at Emory University, Young was inducted into the American Academy of Arts and Sciences in 2016. His many other honors include a Stegner Fellowship in Poetry at Stanford University, a Guggenheim Foundation Fellowship, a MacDowell Colony Fellowship, and an honorary doctorate from Beloit College. Kevin Young is the Director of the Schomburg Center for Research in Black Culture and is widely regarded as one of the leading poets of his generation. Young is also poetry editor at The New Yorker.

All University Center for the Humanities events are free and open to the public. No tickets required.