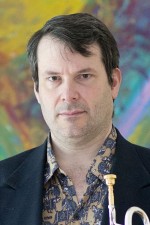 He is an Artist/Educator clinician for the Conn-Selmer instrument company and a published composer/arranger with UNC Jazz Press (http://arts.unco.edu/uncjazz/jazzpress.html). His award-winning jazz compositions and arrangements have been premiered at the Jazz Education Network Conventions (JEN), Lincoln Center-New York City, International Association of Jazz Educators conferences, the Boston Globe Jazz Festival and the Detroit International Jazz Festival.  He has been a clinician at the Helsinki Metropolia University of Applied Sciences, Helsinki, Finland, the International Association of Jazz Educators, The Michigan Music Conference, state and district jazz festivals in Illinois, Michigan and Massachusetts as well as many universities and colleges nationwide. His articles have been featured in the International Trumpet Guild Journal, the JAZZed Magazine and Conn-Selmer electronic periodical Keynotes. He is a Fulbright Scholar having received the Distinguished Chair Award in American Studies (research/teaching) at the University of Ulster in Derry/Londonderry, Ireland in 2013.

As a tenured professor at Western Michigan University he has been the recipient of the College of Fine Arts Dean’s Teaching Award in 2012 and the Distinguished Teaching Award in 2018. He holds a B.A. and M.M. from the New England Conservatory, Boston MA and a D.M.A. from University of Miami, Miami, FL. He is currently Professor of Jazz at Western Michigan University (WMU) and current chair of the WMU Jazz Studies Area. In 2018, Turkish Delight was released to critical acclaim featuring the WMU Jazz Orchestra and works by Cowan. He has held faculty positions at the New England Conservatory of Music, Berklee College of Music and Eastern Nazarene College. He directs the WMU Jazz Orchestra, coaches chamber ensembles and teaches jazz theory, jazz arranging, jazz improvisation, and applied jazz brass.

For more information on the recordings and music of Scott Cowan please go to cowanjazz.com