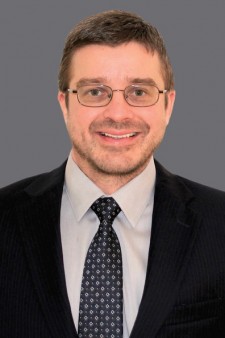 Dr. Gellert Mezei will be presented the 2017 Emerging Scholar Award during WMU's academic convocation ceremonies at 11 a.m. in the Bernhard Center. The event will feature WMU President Edward Montgomery's State of the University address as well as the presentation of four other sets of campuswide awards honoring Distinguished Faculty Scholars, Distinguished Teaching Award recipients, those being honored with Distinguished Service Awards and those receiving Make a Difference Awards.

Mezei, a faculty member since 2007, has developed a novel class of compounds called "nanojars," doing research that could potentially assist in purifying water.

Working with a 2014 National Science Foundation grant for $284,833, Mezei's team has shown that nanojars can reduce levels of arsenic and chromate from water to those acceptable to the Environmental Protection Agency.

He has had his work not only published in several peer-reviewed journals, but also featured on the cover of prestigious journals such as "Chemical Communications," "Chemistry — A European Journal," "Dalton Transactions" and "Green Chemistry."

Mezei has been a mentor and supervisor for numerous graduate and undergraduate students and worked with the American Chemical Society's Project SEED for economically disadvantaged high school students. He also has assisted with the Science Olympiad, organized activities for "Chemistry Day at the Museum" in Kalamazoo and participated in WMU student orientation and advising events. He has been an active member of the American Chemical Society since 2000.

He has received numerous awards at WMU, including the 2012 Arts and Sciences Teaching and Research Award; 2012 and 2016 Discovery and Dissemination Awards; 2008, 2010 and 2017 Faculty Research and Creative Activities Awards; and a 2010 Impacting Communities by Advancing Chemistry Award.

He earned his bachelor's and master's degrees in chemistry from Babes-Bolyai University in Romania and a Ph.D. from the University of Puerto Rico.

Mezei's work was recognized by fellow scientists around the globe who recommended him for the Emerging Scholar Award. His "creative approach to a stunning range of research problems has led to significant advancements in scientific knowledge as well as to practical applications in different fields of chemistry...," said a professor of chemistry at another university who is a Nobel Laureate in chemistry.

A colleague in WMU's chemistry department praised Mezei not only for his impact in the field, but "societal applications, such as water treatment around nuclear wastes, new synthetic methodologies for pharmaceuticals and highly effective catalysts." In addition, as a contributor the past eight years to Chemistry Day, he "was able to show the power of science to young children with his chemiluminescence and volcano demonstrations."