KALAMAZOO, Mich.—When you're a heating and cooling contractor, it's important to get all your ducts in a row. The process can be labor-intensive and time consuming. But two Western Michigan University sales and business marketing students are ready to give installers some relief on the job site. 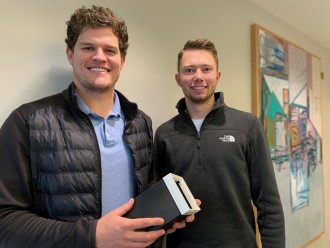 Seniors Brennan Vaughn and Danny Rogers are headed to Minneapolis for the Schulze Entrepreneurship Challenge. Only 25 teams from across the country were selected to compete in the three-day competition, which has been likened to "Shark Tank" for college students. The stakes are high, with more than $250,000 in prize money up for grabs for the teams who make the best product pitches and develop the most innovative concepts during four separate competitions.

"It's very exciting because over 150 applicants submitted their business ideas," says Vaughn, who is from Mattawan. "It's just a surreal moment to not only be representing Western Michigan University, but also be representing an idea that's in its very early stages that I thought of."

Vaughn came up with the idea for SnapDuct—an innovative connection system for ductwork that could save HVAC installers time and money. It involves a coupler fitted with an internal rubber gasket so that a contractor can easily and quickly snap ducts into place.

"I grew up in a small family heating and cooling business where I was a part-time helper, installing and sealing sheet metal ductwork in the summertime," says Vaughn, whose father owns Mattawan Mechanical. "What I found to be a problem in the industry is the process of installing ductwork and sealing it at the same time. It's by far the longest process out of anything else an HVAC contractor does."

He started developing the concept in December through Starting Gate, WMU's entrepreneurship incubator for students. Then, he got to work. 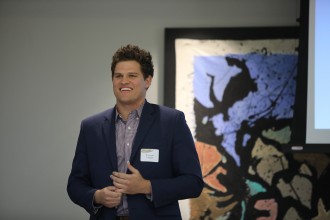 Vaughn hones his skills during a pitch competition at WMU.

"I've been doing a lot of trade shows, phone calls, going to job sites and observing installers to make sure that this problem is something that can actually be solved," says Vaughn.

When Vaughn submitted his application for the competition, he asked Rogers to come on board to help develop a financial strategy and bolster his product pitch. The team used WMU's resources like market research databases to understand market sizes and how to enter those markets. They also learned about a growing void in the industry: labor.

"Everybody estimates that we're going to have a huge delay in the trades workforce and prices are going to skyrocket," says Rogers, who is from Ypsilanti. "So we're trying to implement a product that can save time and enable them to get more work done."

The team also enlisted the help of WMU engineering student Max Chen, who helped design and create a SnapDuct prototype. They'll take that 3D printed prototype with them to Minneapolis, where there's more than just prize money on the line.

"I'm most looking forward to meeting entrepreneurs from all over the country and networking with them, so that I can get a better understanding of entrepreneurship as a whole and what you need to be successful with any idea," Vaughn says.

"What an opportunity to finish off our college career at something like this and represent Western and represent SnapDuct," says Rogers.

The competition runs from April 11 to 13.

This is the third year in a row a team from Starting Gate was selected to compete in the Schulze Entrepreneurship Challenge.

Starting Gate is a student business accelerator that gives students resources to develop their startup companies. Located in the Park Trades Center Building in the heart of downtown Kalamazoo and operated by the Haworth College of Business Center for Entrepreneurship and Innovation in partnership with the Western Michigan University Office of Community Outreach, the accelerator is open to all WMU students through a competitive application process. Starting Gate provides a fast-track to business launch.