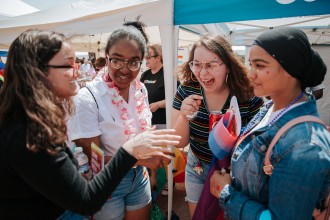 A group of students talks at Kalamazoo Pride.

KALAMAZOO, Mich.—In West Michigan and across the country, members and allies of the lesbian, bisexual, gay and transgender communities recognize June as Pride Month.

"Pride, to me, is the what it means to be able to live in a world that actively tries to keep you from being who you are and simultaneously be who you were always meant to be," says Western Michigan University student Chris Mattix.

From Fall Fab Fest to the OUTspoken student group and the Office of LBGT Student Services, WMU offers a number of resources for support, education and advocacy around issues of gender identity/expression and sexual orientation. 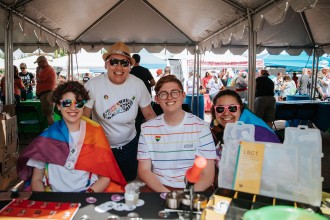 Nguyen, second from left, stands with students at the Office of LBGT Student Services table at Kalamazoo Pride.

This year marks the 50th anniversary of the Stonewall riots, a clash with police at a New York bar seen as a safe haven for the gay and lesbian community. Many believe that event sparked the gay rights movement. It also marks the 30th anniversary of WMU's Office of LBGT Student Services, which is the sixth oldest office of its kind in the nation.

"I think a lot of the work we're doing right now involves awareness and advocacy as well as creating spaces for LGBT students to figure out their identities," says Nathan Nguyen, who directs the office.

Plans are in the works for a celebration to mark the office's anniversary on campus in the fall.

And winter 2020 will also see a first at WMU: The campus will host the Midwest Bisexual Lesbian Gay Transgender Asexual College Conference February 14-16. Billed as "America's largest conference for queer and trans+ college students," MBLGTACC is expected to draw more than 2,000 people to Kalamazoo. 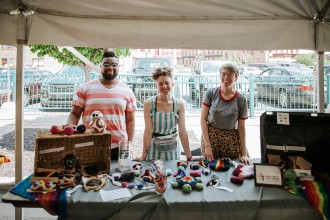 Lewis, left, stands at a table at Kalamazoo Pride.

"Without my experiences at Western and especially without the Office of LBGT Student Services, I wouldn't be the same person I am today," says Mattix, a history major from Bangor, Michigan.

Mattix, who came out as nonbinary in 2017, is among the hundreds of students who have found a home on WMU's campus.

"A lot of the time, college makes you feel like you're on your own. That can be great for creating independence, but when you're also coming to terms with your identity, it can be very isolating," says Mattix. "So, it's important to have the resources of the office."

"As humans, we're communal creatures. We're social creatures. We need that support from people around us, and it's even harder when you're marginalized," says Lewis. "I think the Office of LBGT Student Services is an example of what it looks like to bring together people  who, for whatever reason, society has pushed away and reminding them that they have a place, they have a purpose." 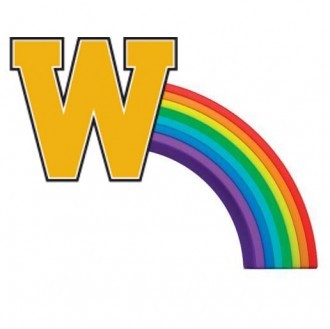 WMU offers a number of programs aimed at educating and creating safe spaces for students, faculty and staff.

Information about more opportunities to get involved is available through the Office of LBGT Student Services.