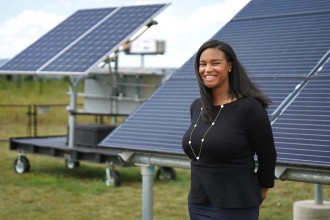 KALAMAZOO, Mich.—Glaciers melting. Temperatures hitting record highs. Wildfires ravaging thousands of acres. The headlines related to climate change are alarming. Scientists are urging changes in behavior and policy to slow the warming trend, and many governments and businesses are enlisting help to answer the call.

Dr. Brandy Brown, who earned a doctoral degree from Western Michigan University, was tapped to lead the charge in Michigan. Tasked with coordinating the state's response to climate change, Brown was named climate and energy advisor in June. Liesl Clark, director of the Michigan Department of Environment, Great Lakes and Energy, calls her a perfect fit for the role.

"Dr. Brown is a strategic thinker who knows how to set objectives that matter, design programs to accomplish those objectives and measure progress along the way," Clark says in a release.

In her new role, Brown has hit the ground running—talking to energy experts within EGLE and reviewing baseline data on energy consumption and emissions from previous administrations.

"I think that we need to continue doing what we're doing but emphasize sustainability and a clean energy future in a stronger way," says Brown, who honed her critical thinking and problem-solving skills in WMU's Interdisciplinary Ph.D. in Evaluation program—the only program of its kind in the world. 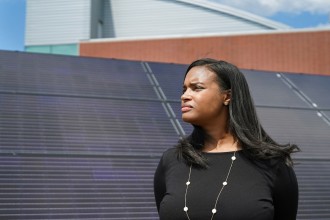 Brown attributes her success to the one-of-a-kind evaluation program she went through at WMU.

The interdisciplinary nature of this program gave me more choice and made me much more invested in what I was learning and wanting to do it well.

Learn about her experience.

"One of the things I've been doing is using the evaluation knowledge that I learned in my Ph.D. program to look at the data and see what we can pull together to construct some type of dashboard to be able to stick to the baseline and then construct our goals from that," says Brown.

Michigan is working in conjunction with the U.S. Climate Alliance toward the goal of reducing emissions up to 28% by 2050 which aligns with the Paris Agreement—a global climate effort signed by nearly 200 countries. Brown hopes to surpass that goal much sooner, emphasizing that recent studies show the impacts of climate change escalating more quickly than previously thought.

"My dream would be in the next 3.5 years to help empower a coalition of Michiganders from every sector to work together and achieve these goals."

In addition to gaining insight from "in-house" EGLE experts, Brown is reaching out into communities across Michigan, having conversations about climate-related issues already impacting neighborhoods.

"It's not just recognizing that climate change is real and that it's occurring, it's telling that story and making sure that everyone understands how it affects them and what that means," Brown says. "How we build our road infrastructure, our energy infrastructure, everything needs to consider where we're at now, what road we're on and how to get off that road onto a greener path."

With its rich manufacturing history, Michigan is well positioned to be on the cutting-edge of energy efficient technology.

"The whole auto industry is undergoing a transformation that people may not quite grasp yet," says Brown, highlighting electric cars in development that can run entirely on renewable energy. "They are shifting their business models to go cleaner and greener."

Autonomous, connected, electric and shared technologies are being developed quickly to enhance both sustainability and customer experience.

Universities also have the ability to play a large role in the climate future.

"Western and other similar universities are beacons within the community for a lot of different things and often set the standards, exposing not only students but the surrounding community to new and different ways of doing things," says Brown.

Considered one of the top "green colleges" in the country, WMU has implemented a number of programs aimed at reducing the University's carbon footprint and promoting sustainability such as installing electric vehicle charging stations and solar arrays. Students and faculty are also conducting important research to help businesses optimize their resources and become more energy efficient.

"If Western takes a very strong lead in energy and considers climate change in all of its future planning and investment decisions, that would have strong ripple effects."