KALAMAZOO, Mich.—Sugar Hill Gang. Public Enemy. Eminem. Their music defined a generation. Throughout the month of February—in celebration of Black History Month—the Lewis Walker Institute for the Study of Race and Ethnic Relations at Western Michigan University will celebrate the hip-hop movement.

"Hip-hop culture did not just pop on the scene; it is linked directly to the history of the black experience," says Dr. Khalid el-Hakim, who curated the exhibit. "So, hip-hop's role in black history is to be an authentic representation of the current times."

"Hip-hop has permeated every fabric of society, whether it's sports, country music, jingles, ads, clothing," says Shimonta Dickerson, administrative assistant senior in the Walker Institute. "I think it's important for people to know the history."

The All-Time Top 10 Hip-Hop Movies +1 Museum Exhibit and Film Festival will take guests on a journey through the evolution of the genre.

"The films were chosen based on their impact and how they reflect the five fundamental elements of hip-hop culture, which are deejaying, emceeing, breaking, graffiti and knowledge of self," says el-Hakim.

In addition to movie screenings, presentations of "8 Mile," "Beat Street," "Dave Chappelle's Block Party" and "The Untold Story of Detroit Hip Hop" will also include a chance to talk with people involved in the films, like MC Sha-Rock—hip-hop's first female emcee.

Tickets can be purchased separately for $5 per movie, or a VIP wristband available for $15 grants access to every showing and speaker event. More information is available on the Walker Institute's Facebook page and on Eventbrite. 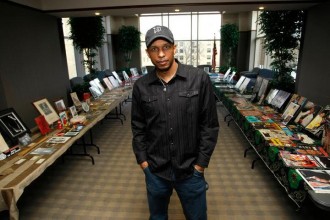 El-Hakim takes his collections on the road across the country.

The month-long event will also launch the new Michigan Hip-Hop Archive at WMU.

"It will be the first archive in Michigan dedicated to collecting, preserving and educating the public on the phenomenal contributions of hip-hop culture in Michigan," says el-Hakim, who earned his master's degree at WMU.

"Having the Michigan Hip-Hop Archive on campus will make Western Michigan University among only a handful of universities such as Harvard and Cornell that have made a commitment to document and preserve one of the most influential cultural phenomena in recent history."

The initial 200 artifacts included in the archive come directly from el-Hakim's personal collection, which he's displayed in his Black History 101 Mobile Museum for several years. Having worked in the hip-hop industry for more than two decades, he's amassed a number of flyers, publications and photographs from artists he's worked closely with.

"My favorite piece(s) are in the Public Enemy display case. Public Enemy is receiving a Grammy lifetime achievement award this year, and some of those items come personally from Professor Griff of Public Enemy."

El-Hakim, a former middle school social studies teacher in Detroit, began looking at graduate schools when he decided to pursue the growing demand of his mobile museum full time. The master's degree in socio-cultural studies of education offered by WMU's College of Education and Human Development gave him the opportunity to complete a capstone project that became a published book.

"My experience here on campus was enriching as a graduate student and accommodating to my family," says el-Hakim, whose wife recently began graduate school at WMU as well. "I had an incredible group of supportive professors in the College of Education who have cheered me on all the way through earning my Ph.D. recently at the University of Illinois."

Currently on a cross-country tour with his mobile museum, he's committed to helping grow the academic and cultural community at WMU through the upcoming film festival and archive installation.

"We are just trying to bring people together at the end of the day," says Dickerson. "Music has always been universal."