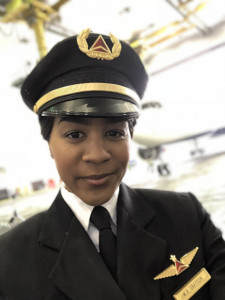 ATLANTA—Sitting in the cockpit of a Boeing 757, Monique Grayson sees her childhood dreams realized on a daily basis. She’s wanted to be a pilot ever since she boarded her first plane to California as a little girl.

“I remember then thinking, this is something I want to do,” she says, intrigued by the science behind aviation and the prospect of traveling the world. Little did she know, she’d set off on a trailblazing path, and decades later she’d still be among a small group of women forging a path for young girls waiting in the wings.

One hundred years since Bessie Coleman became the world’s first African American female pilot, Black women still make up less than 1% of professional pilots in the United States. Grayson and other Western Michigan University alumni are part of a group leading the charge to change that.

Created to inspire young women of color to pursue careers in aviation and diversify the field, Sisters of the Skies, Inc. is a nonprofit organization focused on outreach, scholarship and mentorship.

"When it comes to inspiring and me being inspired myself, I think Sisters of the Skies is a necessary group to continue to expose young females to the career and also to grow numbers in the airlines," says Micah Clark, a first officer at Endeavor Air and 2017 WMU graduate. "It's important to be part of it. I'm very proud to be involved in making this successful, and I really hope it grows." 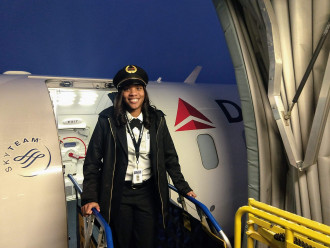 “It’s all about representation and exposure,” adds Alexis Brown, also a first officer at Endeavor Air who graduated in 2011. “I think a lot of people just don’t know what they can or maybe cannot do because they don’t see someone that looks like them. I think it’s safe to say for all of us, we didn’t grow up seeing someone that was like us (become a pilot). But we took that leap of faith and did what we wanted to, and we’re able to open doors now for other people.”

“To have that support, to know that somebody else that’s been where you’ve been is listening to you, and they support you wholeheartedly; it means a lot,” Grayson says.

She knows firsthand the impact support can have. As a student at WMU, without a car, she had a flight instructor who would offer to drive her to and from training to make sure she didn't miss an opportunity to log hours. That same flight instructor called her after graduation in 2010, when she was working in housekeeping at a hotel to fund the remainder of her flight training, to connect her with a job opportunity through a new partnership at the time between WMU and Pinnacle Airlines, helping keep her dream alive. 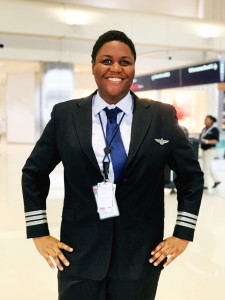 Now Grayson, a first officer at Delta, and her fellow Sisters of the Skies are paying it forward by mentoring girls and women of color who want to follow in their footsteps. Events like “Girls Rock Wings,” where they spend a full day showing girls the ropes on the runway and inside the cockpit, open up a world of possibilities that many of them didn’t know existed.

“I think I even saw a couple of parents tearing up a bit when people were making their introductions,” Brianna Jackson, a first officer at Republic Airways and 2017 graduate, says. “This is a big thing for their parents, too. They haven’t seen a lot of Black female pilots either. So, it’s just as impactful for the children as it is for the parents.”

In fact, many of the women involved in Sisters of the Skies have been mistaken for flight attendants or other airline workers. Clark remembers being stopped by a young Black couple that was surprised to learn she was a pilot.

“It’s not a norm, and it just needs to be normalized,” she says, emphasizing the importance of visiting schools on career days and exposing kids to the profession at an early age.

“For me growing up, if I’d have had someone that looks like me, that I could identify with, that would have given me even more motivation to press on,” Grayson adds. “My motivation for me was the Tuskegee Airmen. It’s like, if these guys can be excellent in what they’re doing and facing all types of racial discrimination, then I know I can get this done. But I think if I had seen someone that looks like me, it would have made me push even harder.” 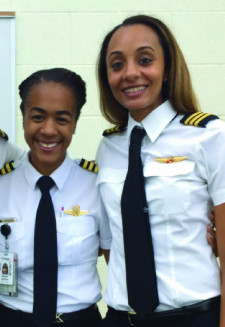 Now being one of those role models for future Black female aviators, Grayson acknowledges the weight of her actions—there are plenty of little eyes fixed on her now.

“You carry that responsibility to make sure that you’re up to par so that you can keep the door open for people coming in behind you,” she says. Having a support network in her fellow Bronco aviation alumni as well as the Sisters of the Skies makes that responsibility easier to carry.

“There are plenty of people in (Sisters of the Skies) that I call to ask for advice, to vent, to ask for help. And everybody in the group is so encouraging,” Jackson says. “Everybody’s main goal is to make sure that we all succeed, because we’re not competing against each other. We’re all there to help each other and give back.”

With the Sisters of the Skies family working together to lift up fellow pilots and raise awareness and interest in the field for young Black females, Grayson sees growth on the horizon.

“The sky is not even the limit,” she says.