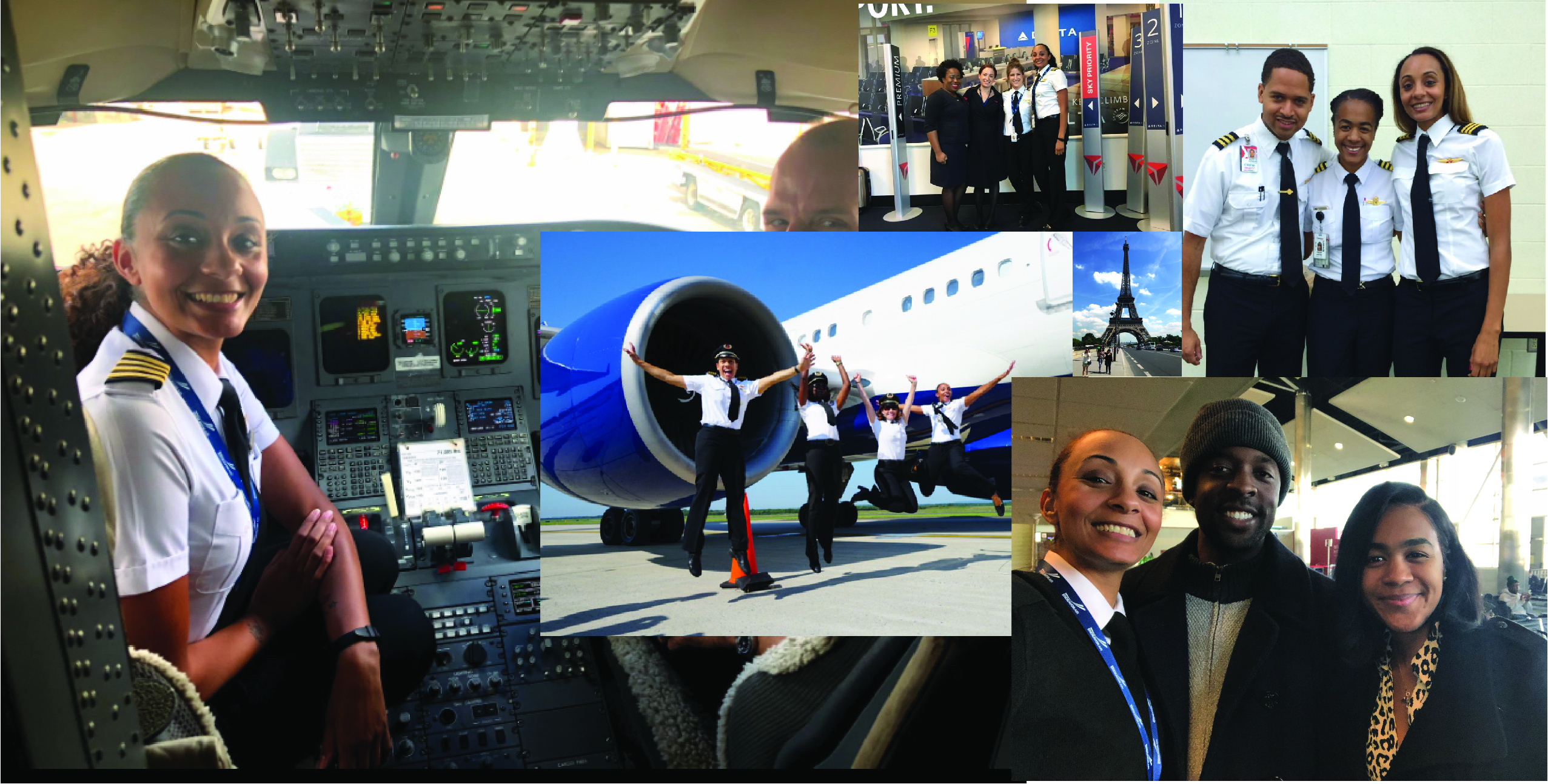 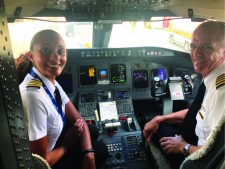 When it came to a career in aviation, Alexis Brown always seemed to know she was on the right "track."

During their college careers, her parents competed in that sport and, listening to their stories about travels and meets while growing up, she wanted to follow in their spike marks as well.  Good enough as an athlete at LakeVille Memorial High School in Genesee County, Brown earned a track-and-field scholarship to Western Michigan University.

The aviation part of the equation was spawned a little earlier when Brown was a youngster in her hometown of Otisville, a small hamlet northeast of Flint.

"My first flight," recalls Brown, now a captain for Endeavor Air, "was when I was in the fourth grade.  I was able to go into the flight deck and talk to the pilots.  Their stories sounded like the best adventures.  That same year at a career day, a Northwest Airlines B747 captain told my class about his life and the amazing things he was able to see and do.  Those two experiences hooked me." 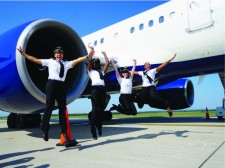 Thus did a match made in heaven lead Brown to a career reaching for the heavens.  Were there hurdles in her lane?  You bet!

But to borrow a metaphor from another mode of global navigation, like a foundering ship on the Great Lakes, there were personal lighthouses sending out guiding advice and beacons of hope.  Returning metaphorically to her field of travel, Brown has a hangar full of trophy mentors.  She interacted with all of them on her way to a 2011 degree in aviation flight science from the WMU College of Aviation.

"I am more of a hands-on learner," says Brown, who was the oldest of six children, "so the first couple of years of college were challenging to me.  I wasn't able to fully grasp the content until I actually started flying.  That's been my way in just about every step of my academic and professional careers."

Aviation Safety rates as her favorite class even though at the time, she had not started taking flight lessons.  Students are required to triple-up as groups for the course and the two she paired with -- Husani Smartt and Chris Holton -- remain friends to this day, and have berths in her hangar -- for good reason. 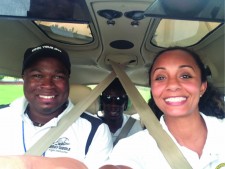 "After two years of not flying because of having a child," she says, "I was convinced by Chris to work with him on my CFI (certified flight instructor credentials).  He was my instructor when I first started and later helped me land my first aviation-related job.

"Husani was a flight instructor before me," Brown says, "and became a rich source of advice and information.  Since Western, we have twice been employed by the same firm and undergone the same experiences.  So, going down the same path at the same time as each other has been a huge help for me."

At the top of the list of teachers is flight instructor, and fellow WMU alumni, Keith Pierson.  "I could write a book about all the things he has taught me," she says.  "I really do believe he set a solid foundation in me.  I knew I would always get honest answers to my questions."

Flying in that same formation is lead flight instructor Jim Whittles.  "He made class fun," Brown says, "but more important, when I or someone else was not understanding the material, he would take the time to make certain we were all on the same page, no matter how long that took." 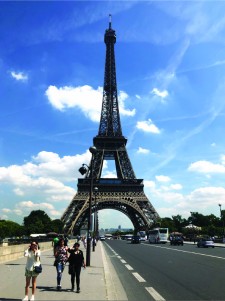 Associate professor Lori Brown is in Alexis Brown's hallowed space as well.  "She has been so active in the industry trying to create an even better quality of life for pilots," the 2011 alumna says.  "After speaking at conferences, she would share stories and trends in the aviation industry to give us better perspectives."  Alongside Brown is testing service coordinator RoseElla Lyke, who aviator Brown met on a school visit with her parents.  "She helped steer me in the right direction early on."

When you are around aviation folks and students, "hanging out" takes on a whole new meaning.  Before she took flight training, she encountered Brandon Jones, another WMU alumnus and flight instructor.  Instead of a local eatery in Battle Creek, it was off to Chicago for pizza and a nice evening flight over Lake Michigan.  Now a pilot for a major airline, Jones made a pitch for her to become affiliated with what became the WMU chapter of the Organization of Black Aerospace Professionals (OBAP).  So did Lyke once Brown entered the halls of Western.

Rare for her, Brown did not heed their advice and regrets that decision, which she freely admits when talking to current students in the aviation program and at aviation camps around the nation. "Brandon and Randall Rochon (a WMU alumnus and a founding member of the WMU-OBAP chapter) have both had my backs since graduation," she says.  "They both push me to be a better pilot and individual.  They make certain I am doing what I am supposed to do so I can advance my career."

Then there is Jelani Kelley, another WMU aviation alumni, who boosted her spirits as she progressed along her path.  "There was a period when I just simply did not know what to do or where to start," Brown admits.  "When I was getting closer to my minimum hours, he would call me daily to make certain I was preparing for an interview, or that everything was squared away."  She credits Kelley with pushing her over the top -- and into employment. 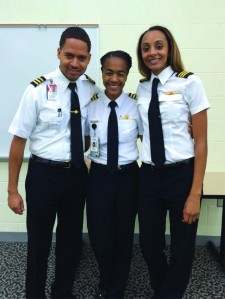 In the pantheon of her advisers is College of Aviation graduate and airline pilot Monique Grayson.  "Getting ready for interviews," Brown says, "she was always there to make certain I was ready and prepared.  She shared her professional experiences and wonderful stories.  To this day, I call her about anything, and she will guide me in the right direction.  If things were not going well and I had my doubts, Monique was always there to reassure me.  She has become my best friend, a person I can count on."

What it all boils down to is that she loves her Western family.

And it has produced an aviator with a billowing resume.

Her first job came in 2014 instructing for the Flight 101 Aviation School at the Oakland County International Airport near Pontiac.  Coming out of that experience was a knack of working with people at different levels of training.  She also saw the value of efficient, effective communications.

From 2015 to 2017, Brown called ExpressJet Airlines home as both a first officer and liaison among pilots, schedulers and maintenance personnel.  ExpressJet, based in Atlanta, operates as United Express on behalf of United Airlines at more than 100 airports in North America, Canada and Mexico -- making 3,300 weekly flights.

"I learned how to operate as a two-crew team," Brown says.  "Up until then, I was used to single-pilot operations.  The company schooled me even more about customer service -- how to approach people depending on the situation.  I had some of the most amazing captains who showed me how to be a leader both inside and outside the cockpit.  I was also able to expand my knowledge about aircraft systems because I did many maintenance and repositioning flights." 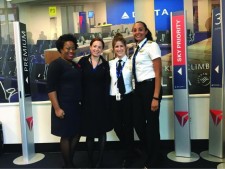 All of this prepared Brown for her current first-officer and captaincy duties for Endeavor Air with the arrival of 2018.  Established as Express Airlines in 1985, it transitioned into Pinnacle in 2002 and became a subsidiary of Delta Air Lines in 2013.  With headquarters in Minneapolis-St. Paul, Endeavor is a wholly-owned subsidiary of Delta Air Lines with hubs also in Cincinnati, Detroit, Atlanta (where Brown lives with her 8-year-old daughter Aubrey Rae), and both LaGuardia and JFK in New York.  It flies a squadron of 162 planes.

Brown relishes her chosen profession, especially the people with whom she works.  "Everyone comes from different backgrounds," she says, "and it's nice to learn how we all grew up -- and how similar we are.  We all worked so hard to get where we are.  Having each other's back is something you do not find in many workplaces.  That's important to me."

Brown no longer requires a sales pitch when it comes to responding to requests for assistance from Grayson, Rochon, the OBAP, Delta's camps for future pilots, and -- of course -- her alma mater. 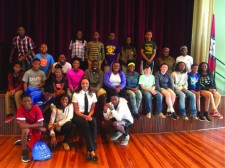 "The College of Aviation invested its people and their time into me," she says.  "They turned my dream into a reality.  Giving back to those who helped you along the way shows appreciation.  Helping people who are in a position I once was is a blessing.  All of us need a bit of guidance as we move to our final destination."

She makes her share of school visits, just like RoseElla Lyke did.  "If I wouldn't have met her when I did, who knows where I would be.  I do know I wouldn't have been able to take my daughter to Israel as I did," Brown says about what her Western days has allowed her to achieve.

Each day she flies, Alexis Brown realizes that, as she reaches for the sky, she is standing on the shoulders of some highly dedicated and caring folks.