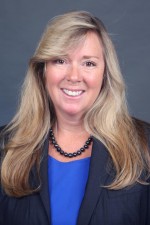 Lori Brown joined the Department of Aviation Sciences, College of Aviation, in 2001. She is a Fellow of the Royal Aeronautical Society and earned her Master of Aviation Human Factors degree from Swinburne University of Technology, Department of Engineering, International Scholars program, in Australia. She continues studies at the Naval Post Graduate School and the U.S. Department of Homeland Security, Center for Homeland Defense, and Security. Brown worked as a Joint Aviation Authority (JAA), Instructor for our International Pilot Training Program (IPTC) instructing students from British Airways, UAE, Delta and KLM, in the classroom and 737-400 Simulator. Her aviation career began in 1988 with Continental Airlines. She holds an Airline Transport Rating, JAA MCC, instructor certifications and type ratings. She has previously trained international pilots, as well as, pilots from several U.S. government agencies, Wal-Mart, and the Government of Mexico for Flight Safety International.

She is the chair for the ICAO Next Generation of Aviation Professionals (NGAP) program, outreach group and serves as a council member for the International Pilot Training Association (IPTA). She serves as an aviation curriculum evaluator for America's Council on Education (ACE) for the Navy, Army, Air Force, Marines, and Coast Guard- to provide a collaborative link between the U. S. Department of Defense and higher education through the review of military training.

Her dedication and passion for undergraduate education earned her the WMU EUP Innovative Teaching Award (2018), the WMU Nominated Michigan Distinguished Professor of the Year (2018), and numerous research grant awards. Her transformational research includes the use of augmented reality in technical driven training and she is currently a researcher for the FAA PEGASAS Center of Excellence dedicated to helping the FAA revolutionize technical training practices. Her work has been featured internationally at ICAO, the Royal Aeronautical Society and in many international conferences, books, and journal publications. Through Brown's Microsoft HoloLens work, WMU has become the first aviation program in the nation to use augmented reality in the classroom. Her teaching assignments have centered on Advanced Aircraft Systems, Airline Flight Operations, Airframe Systems, Aircraft Powerplants and Aviation Meteorology.