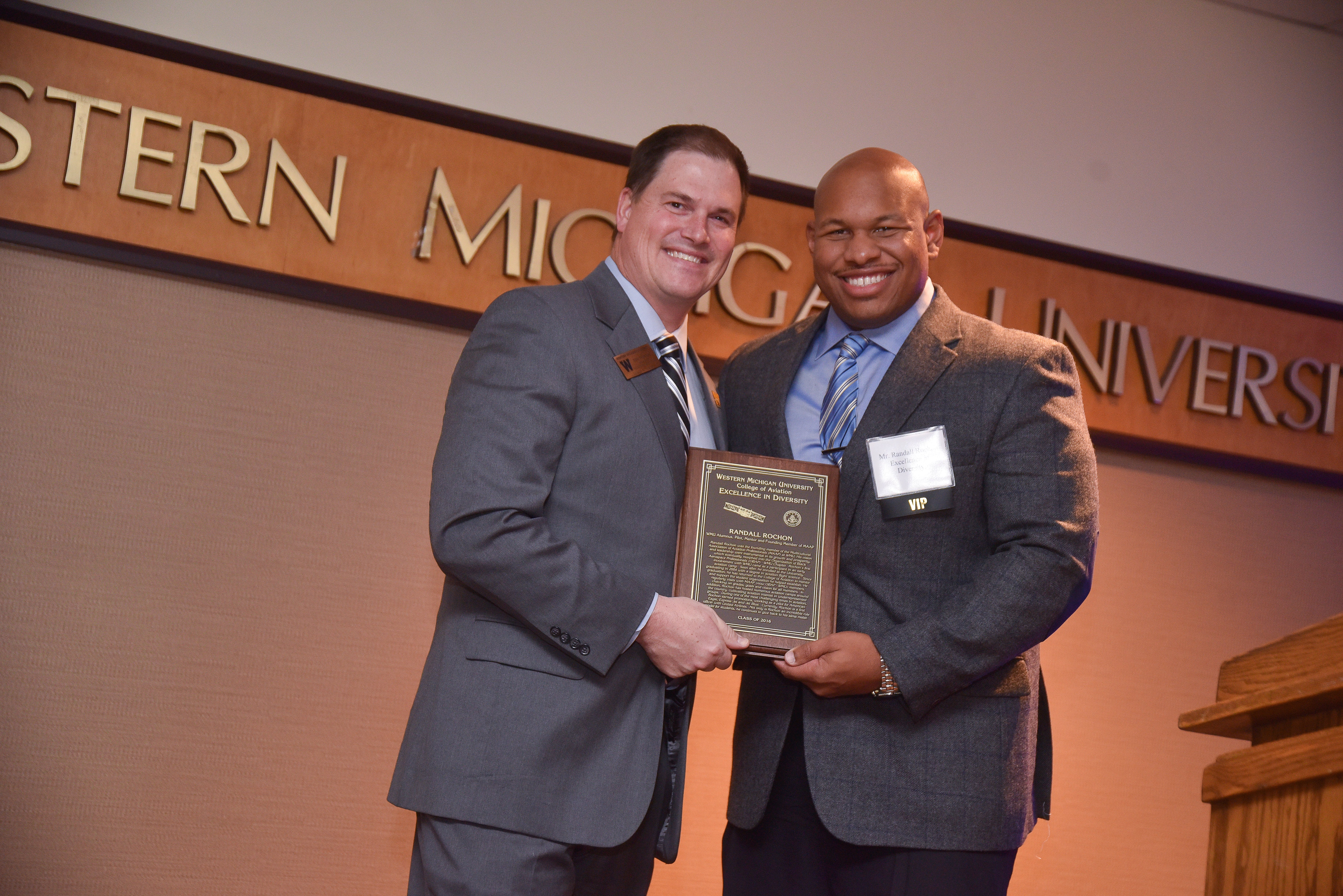 When exploring new worlds and chasing opportunities, it helps to have a guide navigating your paths.

Meet Randall Rochon, a 2002 graduate of the Western Michigan University College of Aviation and a founding member of the campus chapter of what is now known as the Organization of Black Aerospace Professionals - WMU (OBAP). 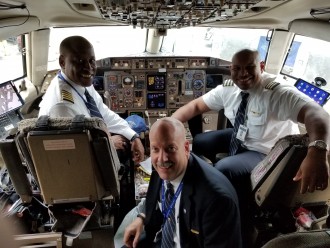 Being once there himself, he knows the bumps and turbulence a student can encounter when in pursuit of a career in the aviation industry.  That's why, despite a hectic and busy schedule as a United Airlines (First Officer) based in Newark, N.J. and all kinds of volunteerism for the OBAP, he finds the time to mentor and counsel the college's current enrollees.

He's logged more than a few miles in the friendly skies since his days on the WMU campus.  As a 10 year old moving with his parents from his initial hometown of New Iberia, La., to the state of Washington, he was introduced to flying.  That trip sparked a keen interest in how that big machine was able to lift off the ground and head for the sun. Even though his folks didn't have all the answers, he did some exploring on his own.  That led to his attendance as a youth at one of the college's summer aviation camps all the way from University Place, Wash., and to his eventual enrollment at Western where he would earn a bachelor's in Aviation Flight Science with a minor in Business Administration.

While at Western, his vision and leadership led to the establishment of the Multicultural Association of Aviation Professionals student organization, which has since morphed nationally into the OBAP-WMU chapter. These extra-curricular activities and solid scholarship earned him an internship with Atlantic Southeast Airlines in Atlanta, Ga.

"There I learned a lot about how an airline operates," Rochon says.  "I had the chance to work in various flight-operations departments and with some of the top people in the company.  Once that was over, I needed money so I started working as a departure coordinator for Atlantic Southeast.  My job was to assist about 30 flights per evening for an on-time departure.  I was the liaison between the flight crew, ramp tower, operations, and the gate agents.  My duty was to make sure that everyone was in sync with that particular flight and that we boarded on time for an on-time departure.

"If weather was a factor," he says, "then we had to do what we could to assist the flight's departure as soon as practical.  In this job I learned what makes a flight and its operations come together for an on-time departure and pleasant experience for the passenger.  All this has helped me in my job today because I know what it takes to make a flight come in, deplane, get cleaned and catered, and then boarded again for departure. 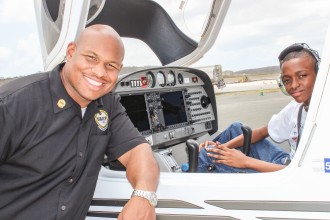 "I handled 30 flights a day," he recalls. "Some stations that I visit today only handle one flight per day and it can get stressful for them.  I try my best to ease the operations stress knowing what they are thinking and going through."  In effect, it was the equivalent of a master's degree in his field. Next came a stint with Yellow Air Taxi in Ft. Lauderdale, Fla., where he logged time as a dispatcher, scheduler, and basically a jack-of-all-trades for the business.  He says he learned key lessons in team play, work ethics for himself, and personal limits -- especially when it's time to say "No."

But it was time to get back in the air on a regular basis. Rochon became a First Officer for American Eagle, on the ATR-72, flying all over the Caribbean out of San Juan, Puerto Rico.  While it was a self-described "fun job," what it really did was fill out his resume as a pilot.

Then he transferred to ExpressJet Airlines in Houston, Texas, piloting a jet aircraft on longer flights.  "Here I really felt like an airline pilot because of some of the long flights we would conduct." Next step up the ladder was JetBlue, again as a First Officer in what he called his "first major airline experience" and at a time when the airline industry was still reacting to the "9-11" attack.

While he truly enjoyed his JetBlue experience during which he believed he would achieve his dream of being "a management pilot," Rochon says he faced "one of the toughest decisions" in his career -- leaving his friends at JetBlue.  He joined United Airlines in March of 2013 to fly the Boeing 737 and is currently a First Officer on the Boeing 757/767 series of aircraft.

"I fly all over the United States, Hawaii, South America, and Europe," he says.  "I absolutely love my job and would not trade it for any other.  It was a hard decision leaving JetBlue but I had to do what I felt was best for me and my family.  All of the past experiences in my aviation career have helped me develop into the pilot I am today using some of those skills in my current job." 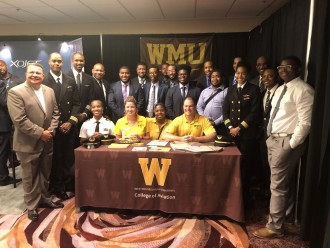 Rochon has not forgotten his roots.  Since joining in 1999, he's still involved and active in OBAP as Vice Chairman of the board of directors and head of its Collegiate Program.  In that role and because of Rochon, WMU students have been able to attend the organization's national convention.  He's also served as industry adviser for the WMU chapter.

He's active in a nation wide-based initiative -- endorsed by the Federal Aviation Administration (ACE Academies) --that provides middle and high school students the opportunity to cultivate a career in aviation through week-long summer camps -- as he once did.  The one he is directly involved with is located in the Virgin Islands. And he's not afraid to talk about the adversity they may face and the learning curves that must be conquered.  If they keep pushing, they can make it. 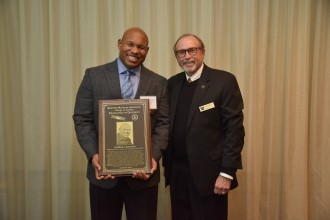 Rochon regularly returns to the Kalamazoo area to mentor and support the student organization he helped establish.  His alma mater saluted Rochon's contributions in 2016, giving him the WMU College of Aviation Excellence in Diversity Award, signifying his role in making the aviation industry look like the rest of America.

There's more to Rochon's career than making a huge aircraft defy the laws of gravity.  "Some of my favorite memories," he says, "are traveling the world and meeting different people.  Also knowing that you are taking people to be with their loved ones in happy and sad times.  You are making a difference in their life in that moment."

Western still has a place in his heart because of lifelong friendships,  "Those are irreplaceable. I believe that my training was superb. I loved my mentors, instructors and professors.  Many are still friends."  Among the many he mentioned are Ray Cain, Jim Whittles, Lori Brown, Tony Dennis, Chris Hammond, Ryan Ramsdell, and Beth Seiler.

He sees his activity in OBAP and mentoring WMU students as a kind of second career.  "Aerospace as a whole is an amazing industry with so many opportunities for everyone," Rochon says.  "I just want to see people happy and reach their potential and goals in life.  The more that we can help others do this, then hopefully we can make the world a better place.  I think everyone deserves a chance to reach their dream, and if I can help in anyway or provide any information, then I will." For example, one initiative is a scholarship Rochon founded with the financial assistance from fellow United Airlines pilots to help those in financial need get their pilot licenses.

Rochon stays involved "because we have to continue building upon the legacies that have been left before us.  I am where I am today in the airlines because of those who paved the way before me.  I want to make sure that I continue to honor those legacies and continue to support, educate, mentor and transform the new generation.  I can advocate applying for scholarships, visit the campus and students, help plan events, and introduce them to the world of networking before, during and after graduation."

For Randall Rochon, what went around for him, can come around for others.