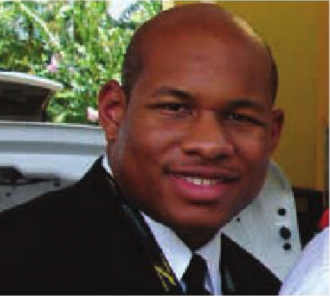 Randall Rochon was the founding member of the Multicultural Association of Aviation Professionals (MAAP) at WMU. His vision and leadership were instrumental in its growth and prosperity, which eventually morphed into the Organization of Black Aerospace Professionals (OBAP) - WMU Chapter.  Rochon's first involvement with WMU came as a participant in an early aviation camps.  Soon after, he enrolled at the University, graduating in 2004 with a degree in aviation flight science.  Since graduation, he has returned to the College of Aviation to mentor and support the student organization he helped establish. He regularly visits with MAAP (now OBAP - WMU) members, checking on grades, goals and vision for all members.  In addition, Rochon has hosted numerous aviation camps around the country, cultivating aviation interest in underrepresented groups.  During one of the most challenging times in aviation, Rochon earned promotions, working as a pilot for American Eagle, Express Jet and Jet Blue.  Currently, Rochon is a first officer with United Airlines.  Not only is Rochon an incredible role model for students, he continues to give back to his alma mater.