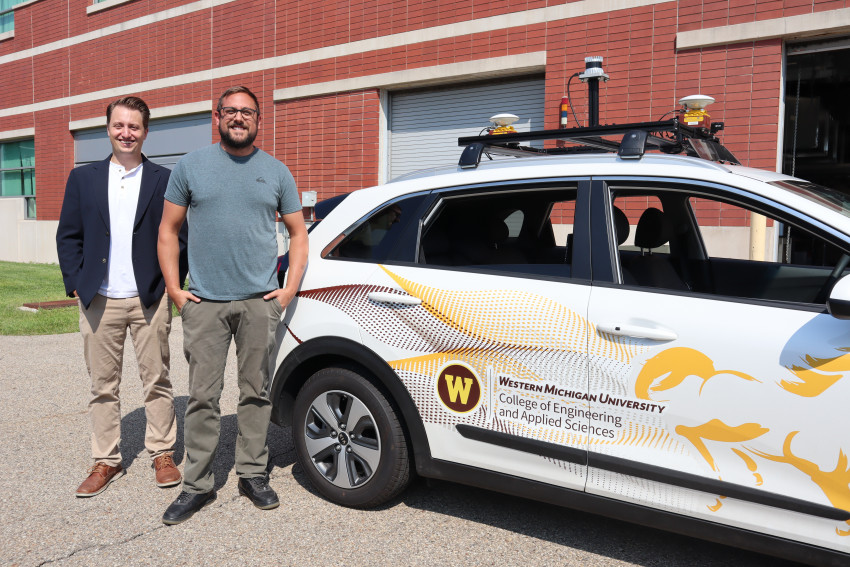 Dr. Zachary D. Asher, left, and Nicolas Brown, a doctoral student in the Efficient and Autonomous Vehicles Lab, stand next to their autonomous research vehicle.

KALAMAZOO, Mich.—Automation is the future of the automotive industry, and Western Michigan University researchers are in the driver's seat of innovation. Researchers in the College of Engineering and Applied Sciences received a three-year, $2.5 million grant from the Department of Energy that will accelerate research aimed at developing infrastructure-based technology to improve energy efficiency in autonomous vehicles. 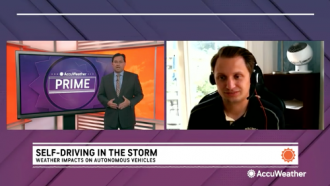 Learn more about Dr. Asher and his team's autonomous vehicle research in an interview on "AccuWeather Prime."

"I'm excited about this project because it's a fundamentally different approach to achieving autonomous vehicles than what researchers have done to date," says Asher, who also is director of the Energy Efficient and Autonomous Vehicles (EEAV) Lab. "What this means for Western is we have a chance to start majorly contributing to the statewide mobility ecosystem. We have a chance to start expanding the entire state of Michigan's influence in this area."

The grant will enable Western's team, led by Asher, to investigate five types of infrastructure-based sensors to improve efficiency. They include technology that could be embedded in a roadway or other external source, sensors that could offload data through a wireless network and a system to draw information from existing infrastructure data. Other partners in the project include Oak Ridge National Lab, the National Center for Atmospheric Research and DriveU.auto.

“We're grateful for this investment, which is a wonderful vote of confidence in our track record and research efforts improving autonomous vehicle technology," says Dr. Steven Carr, interim vice president for research and innovation at Western. "Now WMU has the potential to be a leader in a unique approach to advancing autonomous vehicles. Improving the precision of the technology in this manner will set us apart."

Cost and convenience are two major barriers keeping fully autonomous vehicles off roads today. The reason is in the engineering: In order for a car to operate fully on its own, it requires large and expensive technology that drains both batteries and bank accounts.

"You have all of these sensors that are drawing tons of power being fed into a super computer that processes all those sensor outputs and runs cutting-edge artificial intelligence. It sounds cool, but it turns out that it uses a lot of energy," Asher says. 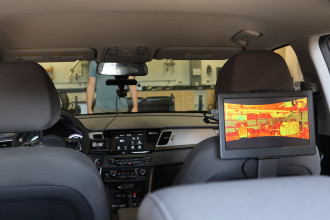 A computer monitor in the back seat shows the image created by sensors on the front of the vehicle.

His team of Western faculty and students will work to find ways to make computations easier or offload some of the sensors, reducing the energy output. For example, some development vehicles have up to five light detection and ranging (LiDAR) systems that utilize millions of data points per second to measure the environment.

"If we removed that and instead just had an electronic barrier on the side of the road where the car can basically download that information, we don't need a high-performance super computer (in the vehicle) or high power consumption artificial intelligence equipment," Asher says. "It's an approach that no one has really pursued too heavily at this point, and we're the lucky ones who get to do it."

"If there's infrastructure on I-94 that will ensure my vehicle operates efficiently, now my range, which was 200 miles, will increase to maybe 250 miles. And I can go to Detroit and back without having to stop to charge," says Asher. "So it's just another approach, which can make a big difference."

A long-term goal of the project is to quantify the costs and benefits—both monetary and environmental—of infrastructure-enabled perception technology to present to legislators making decisions on infrastructure bills.

"Nowadays we understand the costs associated with low energy efficiency. There's air pollution in cities, economic pressure and stuff like that. So, many cities are focused on improving energy efficiency," says Asher. "Some of the techniques to do that are very expensive, but these sensors could be as little as $20 each. So if you put a couple of them along a mile of road, it equates to a very minimal investment and a significant improvement in safety and energy efficiency of vehicles."