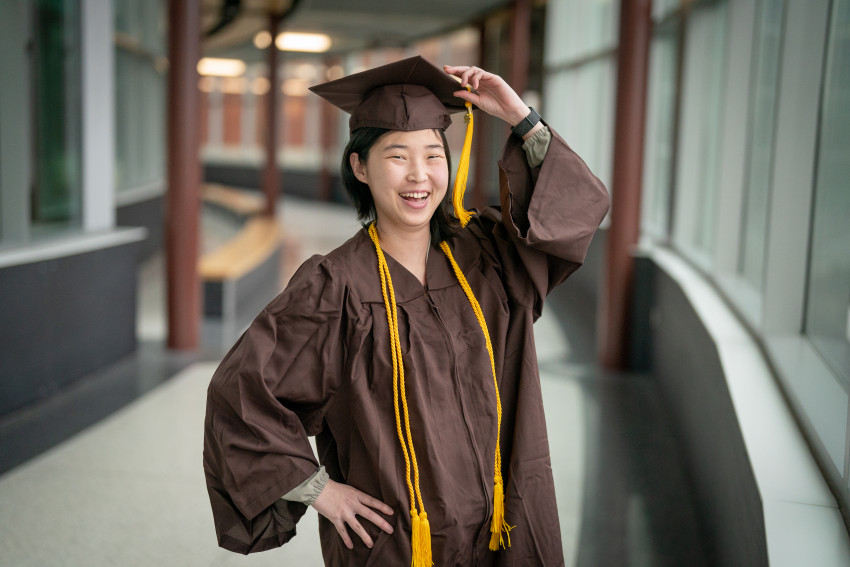 Mey Wong will graduate from Western on April 30 with a computer science degree and a job already secured.

KALAMAZOO, Mich.—Mey Wong was 6 years old when her family moved to Kalamazoo from Cambodia.

"My parents wanted to give their kids a better opportunity here in the United States," she says.

That dream is about to come full circle as Wong prepares to graduate in April from Western Michigan University with a computer science degree and a job already secured.

"It's a big relief," says Wong, who is excited to begin her career as an associate engineer in the information technology department at Kellogg's—a position she was offered after a successful internship with the company.

"I'll mainly be programming, coding and working with Kellogg’s clients, helping them with their business side," Wong says. It's a dream come true for someone who's always had a fascination with computers and numbers. "It's interesting for me to see how as users, or as humans, we can use programming or coding to automate things or to do so many other things beyond our capabilities. 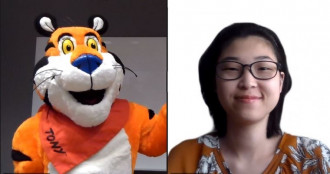 Wong completed an internship with Kellogg's.

She first connected with Kellogg's at a job fair hosted by the College of Engineering and Applied Sciences. Wong says the college's focus on networking and connection to professional opportunities was invaluable in helping her land on a potential career path.

"It's amazing to see how we can use what we're taught in classes into the real world with internships," she says. "I think it really helped that we build solid fundamentals at Western that we can use when we go off into different companies, regardless of what programming language they use."

In addition to fundamentals, she found professors at Western who cared about more than just regurgitating textbooks.—instructors like Guan Yue Hong, associate professor of computer science, who Wong took three classes with.

"The way that she interacts with students really gave me hope that there are professors who are willing to help us. Even though they know more than we do, they're willing to listen to our questions and answer them instead of dismissing them," Wong says.

"I have friends who go to one of the bigger schools in the state, and they have big lecture halls with probably hundreds of students. Here at Western, we still have classes with a lot of people, but they're more condensed and professors are more willing to reach out to individual students." 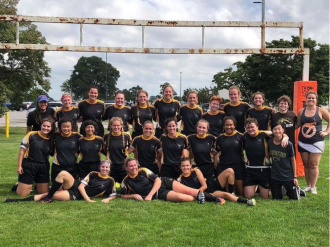 A Kalamazoo Promise Scholar, Wong was initially drawn to Western because it was close to her family. However, choosing to live at home initially made it difficult to find new friends. Wong decided to step out of her comfort zone and explore Western's many Registered Student Organizations (RSO) at Bronco Bash. 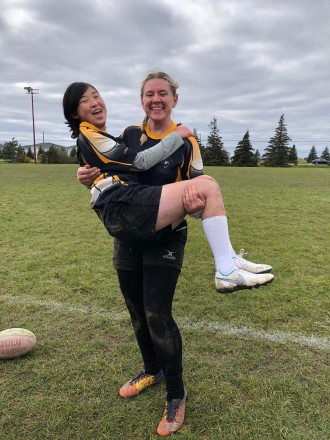 Wong poses with a rugby teammate.

In the spirit of trying something new, Wong dove headfirst into an organization she may otherwise never have even thought to join: women's rugby. Having only played tennis in high school, making the leap to full-contact rugby was a jarring jump. But it was also a rewarding one.

"It taught me how to put myself out there and to go up against people who could be two or three times my size and just stand my ground. It was both mental and physical. I had to keep in my mind that, 'Okay, I'm going to go forward with this; I'm not going to back down,' because when you back down, that's when things go south. So it really helped me with my mental and physical abilities."

Now, just weeks away from her family watching her walk across the stage at Miller Auditorium to get her diploma, Wong is ready to take her abilities to the next level as she begins her career. It will be an emotional day not only fulfilling the dreams her parents had for her so many years ago but also those that her brother, who passed away when she was in middle school, never had a chance to achieve.

"Looking back at it now, in a way, I'm doing this for my brother. He was into engineering, car engineering. So I think in a way, going into computer science was a way that I could be myself along with keeping part of him inside me and going into this field," says Wong. "I think if he was here today, he would be proud of all the things that I've done."