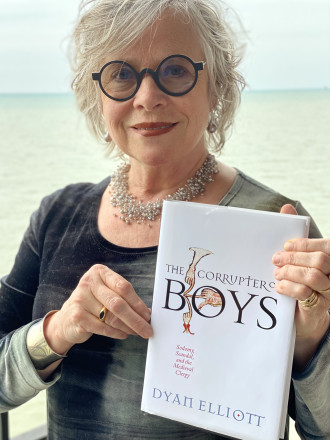 KALAMAZOO, Mich.—A medieval historian, who has published widely on medieval gender and religion, has once again won Western Michigan University's Otto Gründler Book Prize. This time around, she received the honor for her newest book, which has implications for understanding sexuality and gender in the Middle Ages and beyond.

Dr. Dyan Elliott, the Peter B. Ritzma Professor of the Humanities and professor of history at Northwestern University, is the winner of the 26th annual prize for "The Corrupter of Boys: Sodomy, Scandal, and the Medieval Clergy," which investigates the nature of same-sex relationships in the Middle Ages and practices in the church and schools.

Elliott holds the distinction of being the first person awarded the book prize for a second time.  She first won in 2006 with her book "Proving Woman: Spirituality and Inquisitional Culture in the Later Middle Ages" (Princeton University Press, 2004).

The award, which comes with a $1,000 cash prize, was announced at the 57th International Congress on Medieval Studies held virtually May 9-13. It is named for the late longtime director of WMU's Medieval Institute. Awarded annually since 1997, the Otto Gründler Book Prize recognizes a monograph on a medieval subject that the selection committee determines has made an outstanding contribution to the field. Authors from any country are eligible, and nominations are accepted from readers and publishers.

Published by the University of Pennsylvania Press in 2020, "The Corrupter of Boys" is a reminder that premodern individuals focused not on sexual orientation but on the sexual act itself. Elliott explains that her interest in this topic was sparked by contemporary instances of clerical abuse of minors encountered in the press, movies, books and other media.

Paired with her own previous work on the medieval clergy, it led her to this fascinating study of a practice that is not new; in fact, Elliott argues clerical abuse of minors, the fear of scandal and subsequent silence about abuse were institutional practices that sheltered the “corrupter of boys” at the expense of the victims and “spanned centuries.” Part of this culture led to the “seal of the confessional,” which originated as a mechanism to ensure clerical sins would not be broadcast or subject to punishment beyond the imposing of light penances.

Dr. Mathew Kuefler, professor of history at San Diego State University, wrote in "The Medieval Review" that Elliott’s book is “a game changer,” a statement that the Gründler Book Prize committee endorses wholeheartedly.

“Carefully crafted to interrogate past and present practices, this book demonstrates Elliott’s remarkable scholarship, and it is no surprise that she has won this award twice,” says Dr. Jana K. Schulman, director of the Medieval Institute.

View past winners of the Gründler prize.