NEW YORK—With their sequined ensembles and iconic high-stepping precision choreography, the world-famous Rockettes quite literally kick off the holiday season every year at Radio City Music Hall in New York City. This year, a Western Michigan University dance alumna will be in the line. 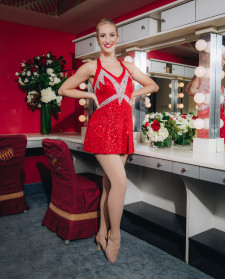 Fentem was among 18 dancers chosen for the newest class of Rockettes.

"It's been amazing," says Gabby Fentem, B.A.'18, who first auditioned in April with about 800 other Rockette hopefuls. She was invited to the Rockettes Conservatory program in August and shortly after completing it, she received the call she earned a coveted spot in the "Christmas Spectacular Starring the Radio City Rockettes."

"(It's) hard work, but I'm surrounded by so many talented women that help support me every day."

The schedule is grueling—Fentem and her fellow Rockettes rehearsed for six hours a day, six days a week for six weeks leading up to the "Christmas Spectacular," which opened on Nov. 18—but she's been preparing for this moment her entire life. She was 3 when her mom enrolled her in her first ballet class. As she grew, so did her repertoire—jazz, tap, modern, contemporary. But it was a trip to see the Rockettes touring company in Chicago as a young teenager that helped put her future in focus.

"They had a master class right after, and I signed up and completely fell in love," she remembers. "I kept watching the Rockettes after that (in things like) the Macy's Thanksgiving Day Parade, which I get to perform in this year and it’s super exciting! It was definitely a lifelong dream since then, getting to watch them and work toward that. It's been a great journey the whole way through."

Fentem knew the Rockettes were extremely well-rounded in their dancing style, and she chose a college program that would help broaden her set of skills. Western's Department of Dance is one of the only in the nation to be trifocal, putting equal emphasis on training in ballet, jazz and modern dance.

"That really drew me to the program," she says. It also helped that a dancer she had trained with growing up in suburban Chicago was already a Bronco, and she had visited campus to see her perform and heard great things about Western.

Fentem performed in "A Chorus Line" at Western in 2017.

During her time at the University, Fentem had several opportunities to take the stage, including roles in the Winter Dance Gala and a production of "A Chorus Line," which she says felt like a primer for her work as a Rockette.

"It definitely kept the spark going for my interest and desire to be a Rockette," Fentem says.

While helping to refine her skills and develop as a dancer, Western's program also prepared Fentem for the professional world.

"I loved that at Western, we had to audition for every piece, whether it was student, faculty or the guest company they brought in. We got so much experience having to actually audition and prepare and learn how to persevere from that. Because you don't always get everything, and it really taught me how to stay disciplined and just keep pushing," she says.

"We had lighting and staging classes; we had choreography classes. And I feel like they did such a great job of sharing with dancers that you can find your path. You don't have to be on stage. You can be a manager; you can run a company or perform if you want to perform. It's just a very well-rounded program."

Putting her future before her, Fentem moved to New York recently so she could be where the action is.

"I started training here knowing that this is where Broadway lives, and I got to take classes from different teachers that really pointed me toward the Rockettes. Then I got to audition." 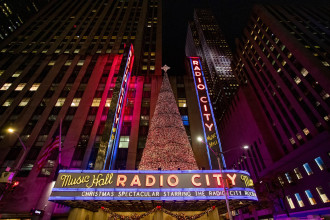 The Rockettes kick off the holiday season in New York City with the "Christmas Spectacular" at Radio City Music Hall.

Fentem says she feels honored to join the iconic show, learning fan-favorite numbers such as "Parade of the Wooden Soldiers" as well as a brand-new addition called "The Dance of the Frost Fairies," where the Rockettes don wings and fairy-drones fly above the audience.

"Even just being a couple of shows in and walking into the theater, I've had little girls recognize me or ask if I'm a Rockette. I've actually had someone ask to take a picture with me. So many young girls can look up to us and see themselves represented on the line, and that's really what it is about for me, getting to spread that joy."

Fentem is one of several Broncos making it big in the Big Apple right now. Between October and December 2022, eight other Western alumni will have opened Broadway shows in varying capacities: