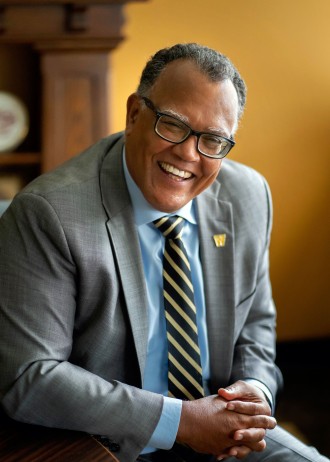 Dr. Edward Montgomery became the ninth president of Western Michigan University on Aug. 1, 2017. He came to WMU from Georgetown University, where he had served as founding dean and professor of economics at the McCourt School of Public Policy.

Since beginning as president, he has launched initiatives focused on student success, revitalizing the South Campus neighborhood, the development of a new budget model impacting all areas of campus, and the implementation of the revised core curriculum, WMU Essential Studies (WES). As part of his commitment to helping students complete their studies, Montgomery implemented a targeted grant program to assist financially at-risk students.

Montgomery earned a bachelor's degree in economics, with honors, from Pennsylvania State University and both master's and doctoral degrees in economics from Harvard University. In 2011, he was elected a fellow of the National Academy of Public Administration and was selected for induction to the American Academy of Arts and Sciences in 2019 in recognition of his outstanding contributions to the academy and the field of public affairs.

During a more than 35-year academic career, Montgomery has held faculty positions at Carnegie Mellon and Michigan State universities as well as the University of Maryland, winning teaching awards some five times over the years. During his tenure at Maryland, he served for six years—2003-2009—as dean of the College of Behavioral and Social Sciences.

During President William Clinton's administration, Montgomery held a number of positions including chief economist and deputy secretary of the U.S. Department of Labor. In the latter role, the department's second highest position, he oversaw operations of a $33 billion federal department. During President Barack Obama's administration, Montgomery was a member of the president's auto task force and led the inter-agency White House Council for Auto Communities and Workers. That position put him in a role national media dubbed "the Auto Recovery Czar."

As a researcher, Montgomery has focused on state and local economic growth, wage and pension determination, savings behavior, productivity and economic dynamics, social insurance programs, and unions. For more than two decades, he has been a research associate at the National Bureau of Economic Research, and since 2006, he has been a fellow of Stanford University's Center for the Study of Poverty and Inequality.

He has served as an advisor to the Federal Reserve Bank of Cleveland, the National Science Foundation, and on the Comptroller General's Educators Advisory Committee for the General Accountability Office. He serves on the board of directors of the Center for Law and Social Policy, First National Bank of Michigan, and Southwest Michigan First. He also serves on the Committee on Economic Statistics for the American Economic Association.

Montgomery and his wife, Kari, a Michigan native, have three grown children—Lindsay, Elizabeth and Edward.