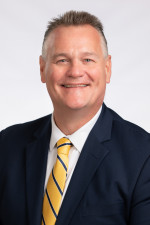 Dr. Olson has joined WMU from North Carolina State University where he served as the associate vice chancellor of academic and student affairs. He is known for his focus on the interests and experiences of students. His emphasis on being student-centered at NC State included facilitating campus-wide programming focusing primarily on race, privilege and engaging in difficult dialogues. He also served as an advisor to student clubs and organizations and fraternities.

He has held multiple roles in the academic and student affairs division at NC State overseeing a broad portfolio of business administration initiatives as well as managing facilities, finance and human resources. Dr. Olson's key responsibilities included overseeing roughly $126 million student fees and auxiliary monies within the division, as well as leading the management of division debt and long-range financial and capital renewal planning. He was instrumental in orchestrating the successful restructuring of university housing. Dr. Olson is praised for his ability to build collaborative connections with campus partners. One highlight is the creation, construction and completion of a $120-million, 1,200-bed apartment complex on the NC State campus.

Dr. Olson is a professor of practice in the College of Education at NC State, and has held several roles at the university in the areas of facilities, housing and residence life, Greek life, student leadership and engagement, and business administration. Prior to his time at NC State, he also held positions in student life and housing at Grand Valley State University in Allendale, Mich.

Dr. Olson holds a doctor of education degree from NC State. He earned a master's degree in student affairs leadership at Grand Valley State, and received a bachelor's degree in speech communications from the University of Wisconsin-River Falls.