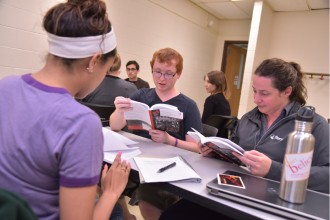 The Department of Gender and Women's Studies is a dynamic and thriving campus presence at Western Michigan University with a distinctive commitment to student-centered learning. We are proud to offer an undergraduate major and minor.

Although a relative newcomer to higher education, the field of women’s studies is 50 years old. A product of the turbulent 1960s and 1970s, women's studies challenged the academic culture in which English classes might only read novels by men, history professors would tell students that women didn't do anything of historical significance and the psychological profession taught that gender nonconformity and homosexuality were signs of mental illness. Inspired by the women's movement and struggles of marginalized groups, students and faculty invented a new area of study. WMU offered its first courses in the early 1970s and created a minor in women's studies in 1975. Over the years, a major was added, the program expanded and an impressive roster of faculty across campus sought joint appointments.

Women’s studies became gender and women’s studies in the early 2000s, reflecting the field’s broadening focus on all genders. The program soon afterward acquired faculty with full appointments in gender and women's studies and became designated as an academic department. Today our department is a vibrant, growing unit with a deep commitment to the university's mission to be learner centered, discovery driven and globally engaged. We have adopted the slogan “Don’t believe everything you think” as it reminds us of the importance of questioning not only social norms and power relationships but also the very ideas that inform our efforts to expand social justice.