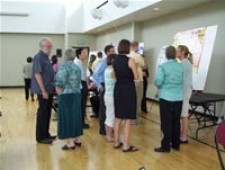 Initiated in 2004, Western Michigan University's Interdisciplinary Doctoral Research Conference is a biennial event that provides a venue for interdisciplinary health sciences doctoral students in different phases of their programs to orally present their research practicum studies and for current or former doctoral students to make poster presentations in a professional setting.

At the conference, a panel of judges selects two award recipients from among the presentations.

If you would like to contribute to this biennial Doctoral Research Conference, the Janet I. Pisaneschi Prize or the R.C. Wardly Award for the Best Scientific Poster, please visit our giving page on MyWMU.

The Interdisciplinary Doctoral Research Janet I. Pisaneschi Prize is awarded to the student whose presentation best represents the highest level of research presented in the oral format. The award is named for Janet I. Pisaneshi, dean of WMU's College of Health and Human Services from 1989 to 2006.

The R.C. Wardley Award for the Best Scientific Poster is awarded to the doctoral candidate or new Ph.D. with the best scientific poster presentation of a dissertation in progress or recently completed. This award was named in honor of the late Dr. Richard Wardley, the husband of our colleague Sonia Wardley. His scientific spirit is most appropriate to this award for interdisciplinary research, as is indicated in the tribute in the British Veterinary Association Gazette.