The fatigue and fracture laboratory at Western Michigan University is a facility for academic and industrial collaboration and interaction in applied mechanics. 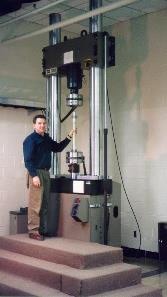 The MTS biaxial universal testing machine in the AMT&E Laboratory is one of a handful of such systems in Michigan. It is a hydraulically operated, computer-controlled facility capable of forces of up to 100,000 pounds and torques up to 55,000 inch-pound at frequency up to 17 Hz. This facility may perform test functions for which companies have only an occasional need. Purchase of such item by a single company would mean a large capital outlay for facility that would not be used to capacity. 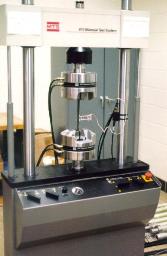 The MTS 810 TestStar Material Testing System is the-state-of-the-art facility which can be used to meet most of testing needs for both monotonic and dynamic tests. The system is capable of forces of up to 22,000 pounds. The TestStar IIs software allowed for digital control and computer automation with provision to generate the standard or custom's design command signals. The hydraulically actuated grips (in both machines) ensure even specimen clamping due to symmetrical housing design and minimize any bending.