Sunway University to success in America 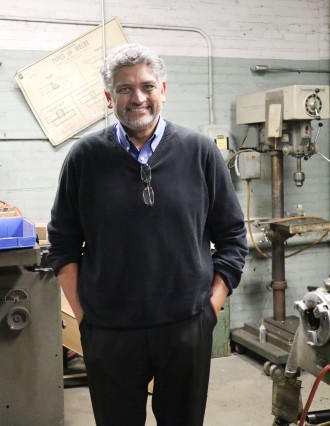 For Anand Sankey, the journey from Sunway University in Malaysia to success in the United States started with a long layover at Western Michigan University’s catering services department.

That conversation was the beginning of a career that’s spanned more than two decades. “I was looking at positions all over the United States,” Sankey says. “Dr. Haenicke’s question opened my eyes to the job possibilities that were right in front of me.”

On November 3, 1997, Sankey began his first full-time position with Western as a prevention maintenance scheduler for the facilities management department. He has since worked his way up through the ranks. First, to the role of mechanical project manager and then to assistant director for energy before assuming his current position as director of maintenance services.

Recently, Sankey was honored with the Distinguished Alumni Award by the College of Engineering and Applied Sciences at the University’s annual Night of Excellence. The college recognized Sankey for his outstanding work for the University and contributions to the college. “Anand’s leadership in facilities management has been instrumental in keeping our college’s home, Floyd Hall, in exceptional condition,” says Steve Butt, the college’s interim dean. “He’s giving back as an alumnus by taking care of our current students, faculty and staff by making sure our facility stays in top shape.”

A career as a mechanical engineer wasn’t always Sankey’s goal: from a young age, he wanted to be a pilot. “The pilot thing didn’t work out, so I started looking for my next step in my higher education journey. Somewhere I heard about mechanical engineering and decided that sounded interesting.”

While the idea of being a mechanical engineer was new to Sankey, the idea of studying abroad was not because his brother was attending a university in England. “My brother suggested I go somewhere other than England, so he could come visit me.”

Sankey decided he would study in the United States. He selected Sunway University and WMU because of the universities’ joint program, which made it easy for students to transfer to WMU after their general studies in Malaysia were complete. It took Sankey just 18 months to complete enough credits to transfer to Western Michigan University.

His transition to WMU was smooth, Sankey says, because older students from Malaysia provided mentoring on everything from where to buy groceries to how to get a driver’s license. Michigan was a bit of a surprise, though.

“When I decided to study in the U.S., I didn’t know where Michigan was or anything about it,” Sankey says, explaining that his exposure to the States was through TV shows centering around California. Michigan, he says, was much different than scenes he’d seen of warm California. But, he enjoyed his first winter in Kalamazoo, calling it “refreshing.”

Now, Sankey is firmly rooted in the WMU and Kalamazoo communities, is married to Kalamazoo-native Jennifer, and father to a teenage daughter. He’s also giving back to the University that welcomed him 25 years ago by mentoring students.

Sankey found his first professional position challenging at times because he didn’t have hands-on experience. He found the mentorship provided to him by older facilities management coworkers invaluable and wants to help current students get a leg up before they graduate. So, he hires interns and student employees regularly.

“I want to provide a hands-on experience for students,” Sankey says. “My intention is to help as many students as possible, to give them an opportunity.”