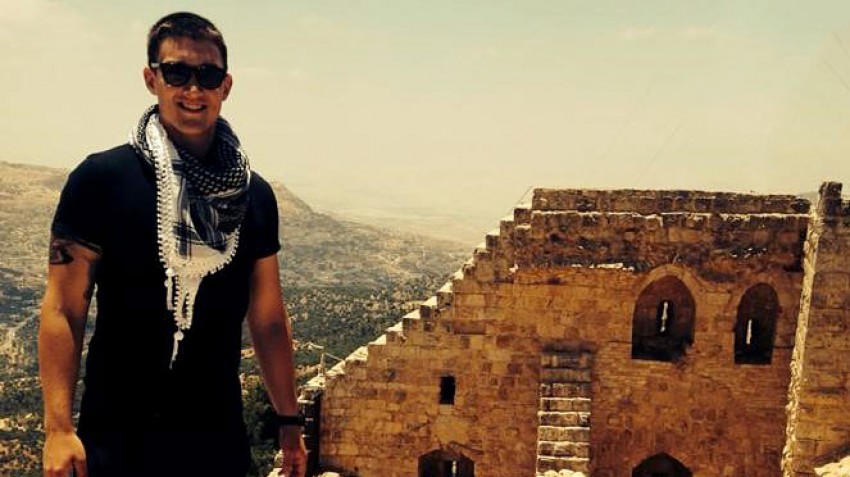 Alex Gibson on an earlier trip to Jordan.

KALAMAZOO, Mich.—A Western Michigan University student from Parchment will study Arabic in Jordan for the 2015-16 academic year through a prestigious federal scholarship.

Alex Gibson will receive a David L. Boren Scholarship of $16,500 to study abroad at the Qasid Arabic Institute in Amman, Jordan, where he will focus on Arabic language.

Gibson was selected as one of 171 undergraduate Boren Scholarship recipients out of a pool of 750 applicants from around the country.

He and his fellow Boren Scholars are studying Arabic, Mandarin, Portuguese, Russian, Swahili and more than 30 other languages while living in countries throughout Africa, Asia, Central and Eastern Europe, Latin America and the Middle East.

A graduate of Parchment High School, Gibson is a junior working on a bachelor's degree based on a self-designed major in Arabic language and Middle Eastern studies.

He is WMU's fifth Boren Award recipient since the program was founded in 1994. His $16,500 scholarship will pay all of his study abroad-related expenses.

About the Boren Awards

Boren scholarships and fellowships, collectively known as the Boren Awards, give both undergraduate and graduate students the chance to develop their language and international skills in areas of the world that are critical to America's continued security and stability.

Sponsored by the National Security Education Program, they are part of a major federal initiative aimed at increasing the number of U.S. citizens who possess foreign language and international skills. Scholars receive up to $20,000 while fellows receive up to $30,000, but all Boren Award winners agree to work in the federal government for at least one year.

"To continue to play a leadership role in the world, it is vital that America's future leaders have a deep understanding of the rest of the world," says University of Oklahoma President David Boren, who as a U.S. senator was the principal author of the legislation that created the National Security Education Program and the scholarships and fellowships that bear his name. "As we seek to lead through partnerships, understanding of other cultures and languages is absolutely essential."

More than 5,400 students have received Boren Awards since 1994, and many of these former scholars and fellows are today contributing to the critical missions of U.S. government agencies in Washington, D.C., and around the world.

WMU provides assistance to apply for grants that support long-term linguistic or cultural immersion in a foreign country. Students are encouraged to learn more by contacting Dr. Michelle Metro-Roland at michelle.metro-roland@wmich.edu or (269) 387-5890.

Metro-Roland is director of faculty and global program development and the University's advisor for students wishing to apply to most of the nation's competitive scholarship programs that have an international focus, including the Fulbright, Boren and Gilman programs.

For more information about the Boren Awards, visit that program's website at borenawards.org. For details about student and faculty funding opportunities, visit the Haenicke Institute for Global Education website at wmich.edu/international.