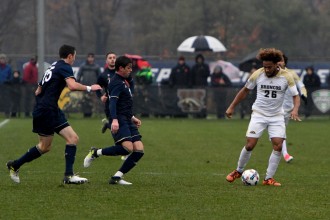 After earning the program's first regular season MAC title, the Broncos now await their NCAA tournament fate. The 2017 Division I Men's Soccer Championship provides for a field of 48 teams to compete in a single elimination tournament. Twenty-four conference champions qualify automatically; the balance of the field is selected at-large by committee.

The championship bracket will be announced around 1 p.m. Monday, Nov. 13, prior to the first round of competition. The WMU men's soccer team will be hosting a watch party at University Roadhouse, just off campus. The selection show also can be viewed live at ncaa.com.

"We will regroup," said WMU head coach Chad Wiseman, who was recognized as MAC Coach of the Year on Thursday. "We know tomorrow at 1 p.m. that our name will be called and there is a great chance we will be a top-16 seed, hosting a second round NCAA tournament match. … These guys have a lot to be proud of and a lot of soccer still to play."

About the championship game

After going down 1-0 late in the first half, Ben Thornton scored from in front of the net after an Akron player had cleared the ball off the line to tie it up at 1-1 with 11 seconds left in the half.

WMU got seven shots off in the second half but the Zips scored two goals to seal the win. Pepe Martinez-Bertrand had a chance from inside the 18-yard box on a volley with 16:30 left in the game that would have tied it up at 2-2, but Akron keeper Ben Lundt made the save.

The Zips took a 2-1 lead on a goal by Sam Gainford in the 56th minute. Skye Harter played a corner kick into the box and Gainford redirected it toward the goal. The ball deflected off of a WMU defender and into the net.

Brandon Bye also had a late chance to tie the game up at 2-2, but after Kosti Moni played him through into the box his chance was blocked by an Akron defender.

The Zips held the advantage in shots 17-10 but only had a slight lead in shots on goal at 6-5.

Wiseman congratulated the Akron Zips on their win and their superior performance.

"From the very start we weren't able to disrupt their rhythm, and when you play Akron, I believe that is the key if you want to find a result," he said. "Our guys competed and played hard. Akron was just better today."