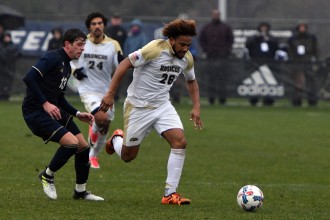 KALAMAZOO, Mich.—The Western Michigan University men's soccer team has received a top-16 seed and an at-large bid to this year's Division I Men's Soccer Championship. Picked as the No. 10 seed overall, the Broncos have a first-round bye and will host a second-round NCAA tournament game.

WMU will face the winner of the Nov. 16 first-round game between Maryland and Albany at 1 p.m. Sunday, Nov. 19, at the WMU Soccer Complex, 4502 Campus Drive, in Kalamazoo. Tickets are $10 and $5 for youth in grades 8 and lower. They are available at the game or in advance at wmubroncos.com/tickets.

This will mark the first time in school history that WMU has hosted an NCAA tournament game. It will be just the second NCAA tournament appearance for the Broncos, who received an automatic bid after winning the Mid-American Conference Tournament in 2003.

"It's an unbelievable feeling and a well-deserved honor for a terrific regular season," said WMU head coach Chad Wiseman, who was recognized as MAC Coach of the Year last week. "I couldn't be more proud of our group of guys for being recognized as one of the very best teams in the nation. Each year we have made steps as a program and now we are here. We're ready to go out there and see what we can do."

WMU won its first-ever MAC regular season championship this season and finished as MAC tournament runner-up. Despite falling in the conference championship, WMU's season was beyond impressive, resulting in the at-large bid, also a first for WMU.

The Broncos enter the NCAA tournament with a 16-3-1 overall record and finished the regular season ranked No. 4 in the nation in the United Soccer Coaches poll. They spent nine consecutive weeks ranked, including seven in the top 10. WMU produced a school-record eight all-conference selections, including five on the first team, as well as the MAC Player of the Year in senior Brandon Bye.

Two of WMU's three losses were to top-10 ranked teams who also fill out this year's NCAA tournament field. WMU fell to No. 7 seed Michigan State in Kalamazoo on Oct. 4 and to No. 5 seed Akron in the MAC tournament championship game Nov. 12. The Broncos' first loss of the season was to Portland Sept. 29 on the road.