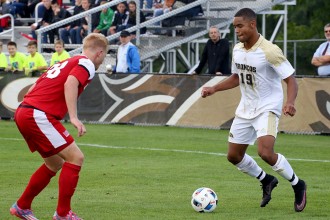 The Broncos were given a No. 10 overall seed in this year's bracket, giving WMU a first round bye as one of the top 16 seeds nationally. Albany defeated Maryland in penalty kicks in the first round to advance to the second round to face WMU.

With the win, the Broncos (17-3-1) now advance to the Sweet 16 to face No. 7 seed Michigan State University who advanced with a 3-0 second round victory over Virginia Tech Sunday, Nov. 26. The WMU-MSU matchup will be played at 6 p.m. Saturday, Nov. 25, in East Lansing.

"To be able to celebrate our first ever NCAA Tournament win, and to do that at home in front of our fans and supporters is amazing," said WMU head coach Chad Wiseman. "We had an unbelievable atmosphere today at the WMU Soccer Complex, and our guys felt that energy today.

"We were able to dictate how the game was played today; that was very important. Scoring two set piece goals was great, and we thought we could create some good scoring chances off dead balls and the guys did just that. Sweet 16 here we come; Bronco nation is headed to East Lansing."

WMU's first goal came off a backside finish by junior Kosti Moni in the 39th minute. Moments after Moni subbed into the game, the Broncos were awarded a throw in on the right side. Ben Thornton and Brandon Bye each got their heads on the ball, and Moni put it in at the back post.

WMU carried the 1-0 lead into halftime and got an insurance goal in the 62nd minute. Bye slotted a pass from the right across the box, and Thornton charged in to bury the ball at the goal line. Thornton's goal set off a scrum between the two teams that resulted in red cards being issued to Albany's Riccardo Iafrate and WMU's Connor McNulty.

In the 75th minute, WMU goalkeeper Drew Shepherd made an amazing diving save to his right to preserve the clean sheet. Shepherd also was forced to make a save on a hard shot in the first half.

"Albany is a very good team with some very talented individual players," Wiseman said. “I thought we were disciplined when we needed to be but aggressive, as well. We are at our best when we're aggressive taking chances."

WMU held the shot advantage, 22-8, and put six shots on goal. It was the Broncos' 14th shutout of the year.

The University of Albany, the American East champion, had its season come to an end with a 14-5-3 overall record.

The meeting between WMU and MSU next weekend will be the second of the season. The Spartans defeated WMU 1-0 in Kalamazoo on Oct. 4 when both teams were ranked in the top 10.

It was the fifth goal of the season for both Moni and Thornton. Bye's two assists brings his point total to 31 on the season, fourth most in WMU history. Goalkeeper Shepherd has been in goal for 13 of the 14 shutouts this year. It was the first ever meeting between WMU and Albany. This is WMU's second ever appearance in the NCAA Tournament and first since 2003.