Japanese musician to perform on campus during second U.S. tour 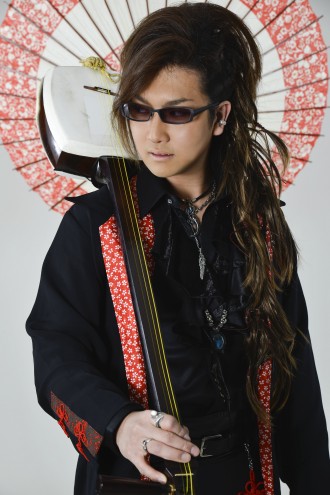 KALAMAZOO Mich.—On his second U.S. tour, Sato Michiyoshi will perform a unique blend of traditional and modern styles on the "shamisen," a Japanese three-stringed banjo, at 7:30 p.m. Monday, March 12, at Western Michigan University. The free, public event will take place in the University's Dalton Center Lecture Hall on main campus.

Michiyoshi is an award-winning performer of "Tsugaru-jamisen," a dynamic style of music played on the shamisen. In his performance, Michiyoshi will focus on demonstrating the range and flexibility of the instrument. The program will begin with introductory remarks from Dr. Joshua Solomon of Hirosaki University, who will be Sato's interpreter during his tour.

Michiyoshi challenges the categorization of the Japanese shamisen as a "traditional" instrument by blending old and new styles in his performance and incorporating improvisation, singing and comedy.

While in Kalamazoo, he will also be performing at the Kalamazoo Public Library at 3 p.m. Saturday, March 10. During this event, a limited number of audience members will be able to try the instruments. Doors open at 2:30 p.m. and seating is limited.

Michiyoshi is hosted by WMU's Soga Japan Center and School of Music and sponsored by the Japan Foundation of New York Grant for Arts and Culture and the Japan Business Society of Detroit Foundation.

WMU's Soga Japan Center is an interdisciplinary unit designed to promote knowledge of Japan to the University community, the city of Kalamazoo and all of southwest Michigan. The center regularly brings scholars, artists and writers to campus to give Japan-related lectures, demonstrations and readings to the community. The Soga Japan Center also hosts film series, displays, musical performances and other events related to Japanese culture.

Learn more about the Soga Japan Center at wmich.edu/japancenter.