WMU engineering student excels in the classroom, on the rugby field 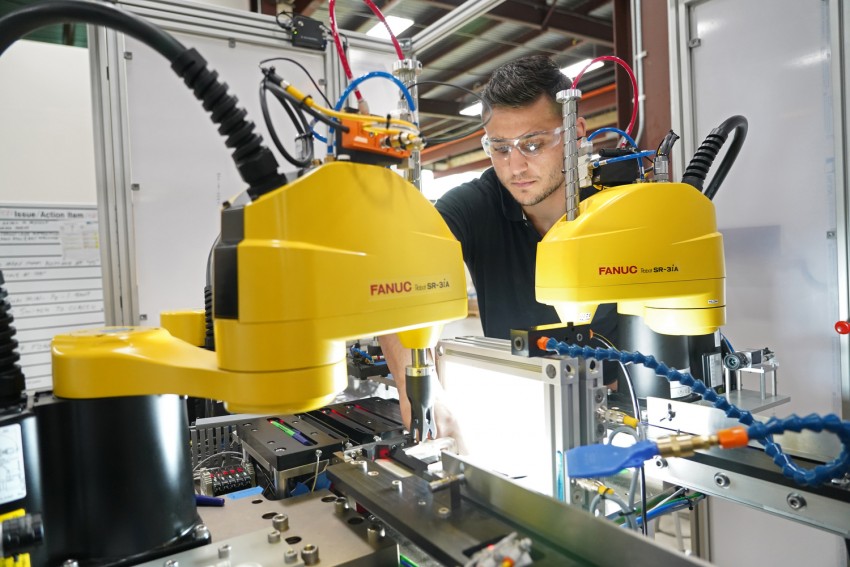 Joseph Backe, a mechanical engineering major, works on a machine during his internship at Edgewater Automation.

KALAMAZOO, Mich.—An elite team runs like a well-oiled machine. It makes sense, then, that mechanical engineering student Joseph Backe leads Western Michigan University's men's rugby team. The club just won the Mid-American Conference Sevens Championship and has its eye on the national championship at the end of May.

"This is the first time Western's ever won the MAC championship," says Backe, president of the men's rugby club. "It feels pretty great."

The thrill of victory helps numb the pain from the hits on the field. 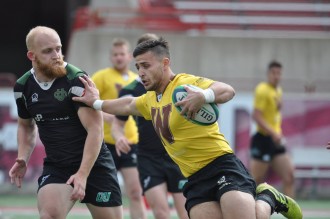 The love of the sport is what drew Backe to WMU. He started playing rugby in elementary school in Naperville, Illinois.

"Most of our team is from the Chicago area, so I played with or against pretty much all of my teammates in high school," says Backe, who heard about WMU from a rugby teammate. "I went on college visits before Western, but as soon as I came here I knew this is where I wanted to go. It's a big school, but not too big, and it just feels like you have a better opportunity to succeed and thrive in this environment."

Backe's intensity on the field carries into the classroom. The Medallion Scholar and honors student is majoring in mechanical engineering, with a goal of completing an accelerated master's degree program.

"I want to do something in aerospace. I don't know why but space has always been a deep love of mine. Hopefully one day I can work for NASA," says Backe, who aspires to apply for the space agency's astronaut training program. "It's a little bit physical. You have to be smart to do it, and I like a good challenge."

"When I was a kid I used to build Legos and K'NEX for hours. When I got older my dad told me I should start thinking about how my interest could translate into an actual career. He suggested looking into engineering." 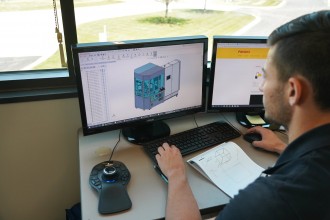 Backe works on a design for a project at Edgewater Automation.

Backe cultivated his skills in math and science courses, taking every class available related to the engineering field in high school. When it came time to look at colleges, he searched for a place where he could continue to develop as both an engineer and a rugby player.

He found that home at WMU, competing for and winning a prestigious Medallion scholarship. Through all of his accomplishments, Backe remains humble.

"I think everybody's just as smart as everybody else, you just have to find that place where you want to work hard."

Balancing a rigorous class schedule with practices and games is tough, to say the least.

"Engineering challenges me," says Backe. "Yes, I do see other students who have more free time than I do, but I couldn't see myself doing anything else. You just have to push through and realize that the end goal will be worth it."

The relationships he's built both in the classroom and on the rugby pitch are helping him reach that end goal.

"I never thought rugby would help me in engineering, but one of my coaches on the rugby team actually got me my internship," says Backe, who has spent the last two summers working at Edgewater Automation. The company designs and builds custom automation equipment.

Backe's connection at the company is coach Semisi Fonua, who works there at the facility in St. Joseph.

"When I heard he was doing well in school, and that he's in engineering, I told him I could help him out," says Fonua. "I knew about his work ethic. He's a hard worker and he's focused."

Chad Henry, director of engineering at Edgewater Automation, describes Backe as the kind of intern companies are lucky to find. 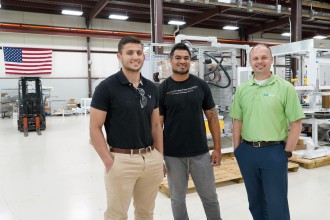 "When we hire an intern, we want it to be a meaningful experience. Not just personally or professionally or even just as a student, but we try to make it so that when they come away from this they've learned something and they've gained something," says Henry. "Joey is working on a project for us that's going to be a trade show display. He's doing the mechanical design working under one of my engineers. We want him to get experience working as part of the team."

Henry says the experience with Backe has been so successful, he's hoping to bring more interns from WMU on in the future.

"I joke with Joey, 'What am I going to do when you leave?'" says Henry. "I need to find a way to connect to Western so we can continue to do this and make it grow."

In addition to work, practice, classes and tournaments, Backe also finds time to volunteer by tutoring at the Boys and Girls Club every week.

Medallion Scholars are required to complete service hours to maintain their scholarship, but working with kids has become more than an obligation for Backe.

"I was actually scared when I first went in, but I love it now," he says. "The kids come in and they'll just run up and hug you."

The experience could also pay dividends after graduation.

"It's helped me learn how to explain complicated things in a simple manner," Backe says. "I can apply that to my job because not everybody's an engineer, so not everyone is going to understand the complex terms I may use. I may have to bring it down to their level so they can understand what a machine does or what the concept is."

Right now, the main concept Backe is focusing on is winning. The rugby Broncos vie for the USA Rugby College Sevens National Championship Friday, May 24, and Saturday, May 25, in Tucson, Arizona.