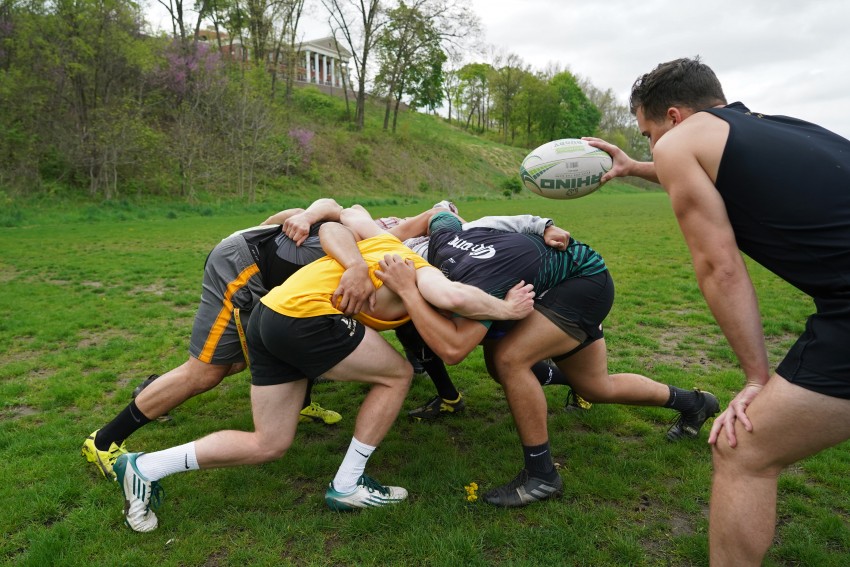 The WMU men's rugby team practices in the shadow of Heritage Hall. The team won its first-ever MAC title and earned a bid to the USA Rugby College Sevens National Championship.

Related story: Rugby club president Joseph Backe excels on the field and in the classroom.

KALAMAZOO, Mich.—Western Michigan University's men's rugby team has a shot at its first-ever national title. Powering their way to the Mid-American Conference Sevens Championship with a decisive win over the University of Dayton, the rugby Broncos are ready to take on powerhouses from across the country at the USA Rugby College Sevens National Championship.

"I was talking to everyone before the game and just saying, 'We're going to win this if everyone gives 100%—110 if you can,'" says team captain Manny Bravo, a junior exercise science major from Chicago. "Leave it all on the field. That's what led us to the championship."

"We are very proud of this group for a number of reasons," says coach Mark Allen. "Their disciplined play, teamwork, fitness, commitment and respect for each other has led to our success."

The road to success was not an easy one. 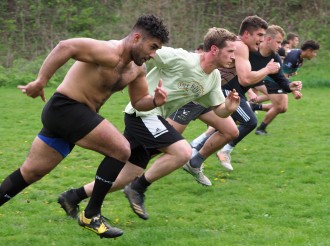 The team says conditioning played a big part in its success.

"When we won the MAC championship, a referee came up to me after the game and all he said was, 'Night and day,'" says Kyle Williams, an accounting major from Paw Paw. "It was unbelievable. At the start of the season, we were off to a rough start. Then everyone just started coming together, and now here we are."

"The chemistry has been great lately," says Daniel Byrne, an integrated supply management major from Elmhurst, Illinois. "Things are going how they're supposed to. We're running our system well."

The team also has a secret weapon in its ranks: coach Semisi Fonua. An elite rugby player, he competed at the international level on the Tongan national team. Allen calls him an integral part of his team's success.

"He travels one hour each way from St. Joseph to share his knowledge and passion with the players," Allen says. "Quite honestly, without his help, we would not be where we are."

Student-athletes credit Fonua with getting them into shape to play at an elite level.

"We are blessed with great kids who treat each other with respect. Captain Manny Bravo and president Joey Backe have led the way and been an integral piece in changing the culture of our club," Allen says. 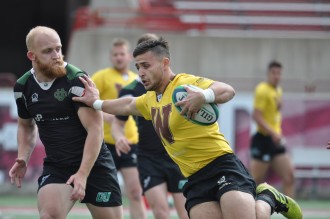 Joseph Backe runs the ball during the MAC tournament. Read more about Backe's success off the field here.  (Roger Mazzarella)

That culture is built on hard work, trust and an unshakable bond.

"It's such a team atmosphere; it's not an individual sport," says Backe, a mechanical engineering major from Naperville, Illinois. "Half the time I don't even call a play and we already know what each other is going to do. We're best friends on the field and best friends off the field. It's just such a great atmosphere to be around. We have a lot of fun."

Bravo and Backe first met on the rugby pitch several years ago as competitors. In fact, many of their teammates met the same way, on the pitch around Chicago where competitive rugby starts as early as elementary school.

"I played with and against pretty much all of our team in high school. I went to South Africa going into my senior year to try out for a team, and I played with a lot of these guys," says Backe. "After I came to WMU, I recruited some friends from high school. They'll hopefully continue that tradition."

"Kalamazoo is just the right distance from Chicago," says Bravo. "I can go visit my family whenever I want, but I actually live here during the summer. I just love Kalamazoo. It's a great place."

SUCCESS IN THE CLASSROOM 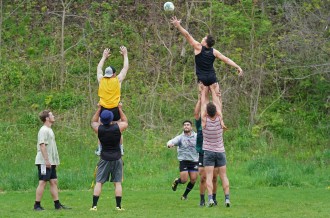 Allen believes academic success is just as important as his team's success on the pitch. He implemented a Bronco Buddy system last fall to give players a boost.

"I wanted to have incoming freshmen get a head start, assigning an upperclassman to assist them both academically and in everyday life at WMU," says Allen. "They are student-athletes—students first."

"Coach Mark has helped me with pretty much everything," says Backe, a Medallion Scholar planning to apply for the accelerated master's program in mechanical or aerospace engineering. "He constantly asks us what our GPA is. He writes letters of recommendation for jobs and internships. He wants you to succeed as a student and on the field as well."

The team has also received support from President Edward Montgomery, a former rugby player himself.

"We have his initials on our jersey. He's come to camps at the beginning of the fall season when we get new players," says Bravo. "It's great to see he's here and it shows the freshmen that he's part of it and he cares."

Montgomery even held an impromptu ceremony in his driveway to present Williams with his degree after the team learned that the MAC championship was the same day as WMU's spring commencement. Williams plans to pursue his master's degree in accounting at WMU and continue playing rugby. 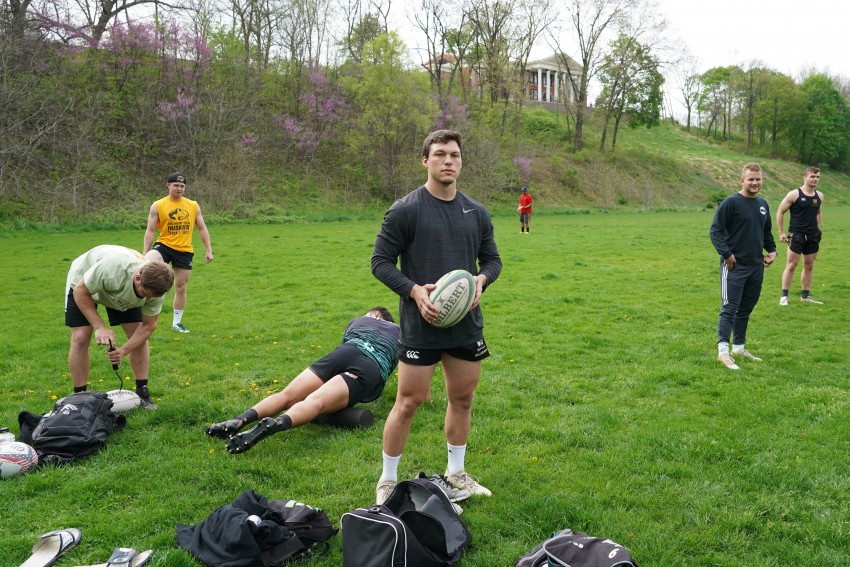 Kyle Williams had to miss walking in graduation because it was the same day as the MAC championship game, so Dr. Edward Montgomery, University president, held an impromptu ceremony when he returned.

Right now, he and the team are laser focused on the national championship.

"We're excited. It's my third year playing, and we finally made it," says Johnny Drozd, a sustainable brewing major from Chicago. "We've trained hard, we work hard and we're in the shape we need to be in."

The USA Rugby College Sevens National Championships are Friday, May 24, and Saturday, May 25, in Tucson, Arizona.