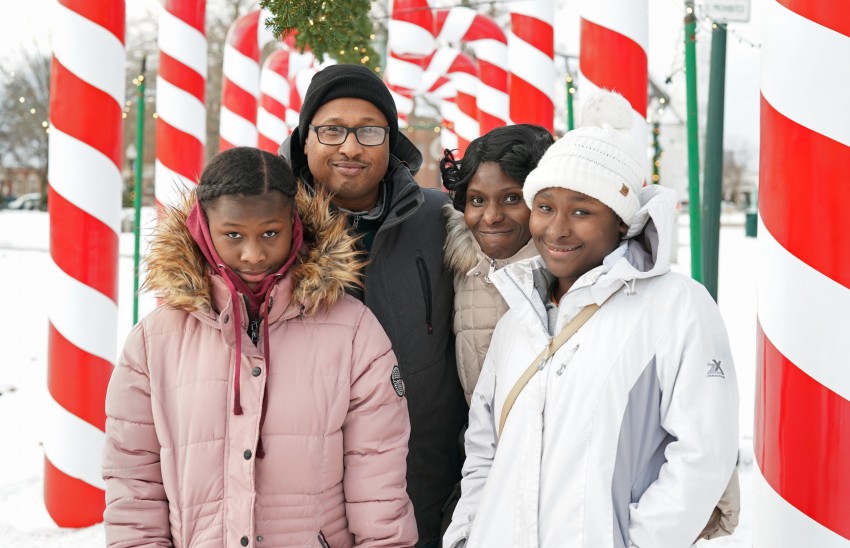 Monica Perkins, Antawn Perkins, Nora Thomas and Trayshawna Thomas see a bright future ahead, thanks, in part, to programs offered and supported by WMU.

KALAMAZOO, Michigan—In elementary school, Trayshawna Thomas struggled. Disinterested and frustrated in the classroom, she barely made it through third grade. Challenges at school were compounded by challenges at home—experiencing homelessness and seeing her parents incarcerated.

"Life hasn't been easy at all," says Antawn Perkins, Trayshawna's father. "My wife and I always discussed where we could have been had we had real support like we support our kids now."

Now a junior in high school, the teen is beating the odds—excelling in the classroom and dreaming of a career as a pediatrician. She was also recently nominated to attend the Congress of Future Medical Leaders in Boston, an honor offered to a select group of top-performing students across the country.

"This is the girl they said wasn't going to make it," says Trayshawna's mother, Nora Thomas. "Now she's succeeding and pushing me to do better, too." 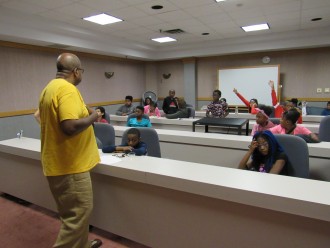 Thomas attributes much of her daughter's success to the WIRE Youth Development Programs offered by the Lewis Walker Institute for the Study of Race and Ethnic Relations at Western Michigan University. Established in 2008, the free programs are designed to introduce Kalamazoo-area youth to college and career opportunities in math and science fields.

The family was first connected to WIRE by program coordinator Gus Calbert.

"Mr. Calbert always made Western students available to us who would come in and help further the (kids') education, and it was just that much more horsepower that they needed," says Perkins. "They would help with tutoring. She had a lot of students help her with her math."

Calbert says his job is to "just be a bridge. That's what the Walker Institute is. We've been a bridge. It's not just about research; it's about helping families." 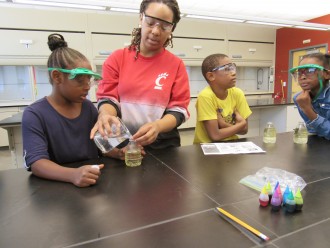 "Doing tutoring helped me to turn in stuff to get better grades and to be proud of myself more," says Trayshawna, who was recognized as an outstanding turnaround student when she finished fifth grade.

"It helps them open up and know that they have knowledge and skills to build, and it lets them know that they're important and valued," says her mother.

"It's a big deal because it's providing our graduate students with some additional opportunities to put what they've learned into practice and share it with the next generation of students who we want to be able to expose to" science, technology, engineering and math disciplines, says Dr. Luchara Wallace, director of the Walker Institute. "Part of the charge with our endowment is to make sure that we're supporting academic programs, but we're also giving back to the community."

All three of Trayshawna's siblings are also heavily involved in WIRE programs. 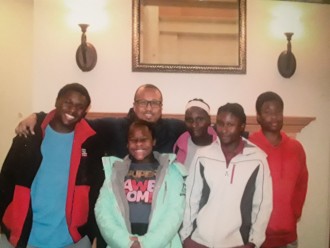 "Bringing them up to campus on Saturday and having college kids and people working on their careers come talk to them about college, being a police officer, firefighter, engineer, lawyer, whatever it was, I would let them come share," says Calbert. "That was to get them thinking, 'We can go to college, and we can do this.'"

In addition to math and science help, Trayshawna's older brother, Trayshawn, also participated in the WIRE Summer Youth Employment Initiative. An aspiring chef, he worked at Layla's Cool Pops—a youth-owned business in Kalamazoo that partners with the Walker Institute to provide placements for WIRE students to learn entrepreneurship, baking and employment skills.

Her parents are also benefiting from partnerships WMU has in the community. Nora Thomas graduated from the Momentum Urban Employment Initiative—a six-week program facilitated by the Urban Alliance that allows recently incarcerated individuals to develop job and life skills to re-integrate into the workforce.

"They have guest speakers come in, help you discover strengths, talk about rehab and getting clean, help you build your resume," says Thomas. "We talked about finances, time management; it was a lot of stuff in a few weeks."

After graduating Thomas was connected with a job at Sigma Machine. She works in the assembly area and builds parts for cars—a job she's grown with and successfully held for more than three years.

"I know that the kids depend on me, so if they see me trying to succeed and going down the right track, then they will want to follow," she says.

"We're so excited because we're getting to see how our programs over the past five years or so have had a positive impact on this family," says Wallace. "Both parents are employed, their children are actively involved in school and they're doing well."

Calbert knows firsthand the impact programs like this have on the community. 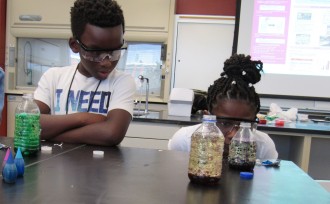 Students complete an experiment at WIRE math and science camp.

"I was one of these kids. I was a kid who had a lot of potential but didn't always live up to it. So, I had some people from Upward Bound and Western Michigan University reach out and say, 'We're going to give you a chance to come to school in the summer,'" says Calbert, who went on to earn his bachelor's and master's degrees from WMU before getting involved with WIRE. The alumnus is now pursuing a doctoral degree in educational leadership at WMU, as well.

"I'm bursting with pride that I now have these students who are graduating from high school. I have other students who come back and say, 'Because you were in my life at this point, it made a difference.'"

More information about getting involved—both for parents and volunteers—is available on the Walker Institute's website.

"This program will help you beat the odds. I've seen what it did for my kids, for other kids," says Perkins. "If anybody out there wants their kids to beat the odds, they better get them involved academically early, get them into programs."