Driven to succeed: Engineering grad found his lane at Western 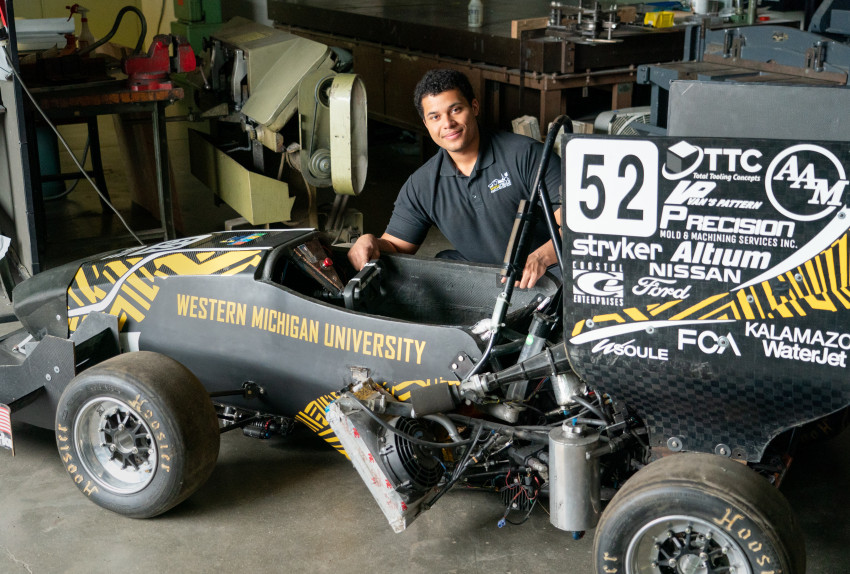 Nick Durham kneels next to a race car he helped build with Formula SAE.

KALAMAZOO, Mich.—The "need for speed" has been with Nick Durham for as long as he can remember.

"I've wanted to be an engineer since I was probably in kindergarten. I'm a big car guy; it's always been cars for me," he says. "I always had Lego cars and was building little robots and things. It was just kind of a natural fit for me."

The drive to work with cars may be in his DNA: One of his grandfathers was a professional drag racer, and the other was an engineer. His passion to follow in their footsteps accelerated as he got older.

"I'm a thrill seeker. I ride snowmobiles, quads, all that stuff," says Durham, who grew up in Lake Orion, Michigan. "I enjoy the speed. I enjoy the technicality behind it and just the emotion and passion people have for cars."

He found a lane at Western Michigan University to put his love for cars on the fast track. As a freshman pursuing a degree in mechanical engineering, he was drawn to Formula SAE, a Registered Student Organization (RSO) that challenges students to design and build a racecar, secure sponsorships and ultimately compete annually at Michigan International Speedway (MIS). 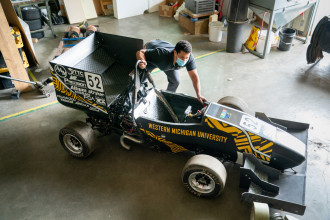 Durham moves the Formula SAE race car in a garage on the campus of the College of Engineering and Applied Sciences.

"(Formula SAE) has been a fantastic chance to make friends, design some awesome stuff and compete in a racing series all in one," says Durham, who has risen through the ranks over the years to ultimately become the president of the RSO. He lists formula racing competitions at places like MIS and in Toronto as some of his most impactful experiences at Western.

"Having the opportunity to learn from older members on the team over the past 4 years has been a fantastic experience," he says. "Successfully completing a competition requires a ton of effort from all the engineering sub teams, as well as our business team. I am very proud of how much we have been able to accomplish, which is largely due to the strong leadership from our team leads—even during a pandemic."

While his time on the team is coming to an end, he is excited to put what he learned to work. Durham graduates Saturday, May 1, with a bachelor's degree and a job waiting for him at Fiat Chrysler Automobiles (FCA) in the Chrysler Institute of Engineering rotational program.

"They'll fully fund my master's degree in mechanical engineering, and I'll do rotations at each department in the company while I'm getting my master's. When I'm done, I'll pick which division I want to continue working in."

"In one of my engineering internships in the past, I got to do a lot of driving and jumping of cars," he says. "So, that was kind of a taste of it, but that would be my dream full-time job: Ride handling, collecting data, making decisions...getting back behind the wheel, testing things, coming back and making changes, then coming up with the end product."

He's well on his way to that goal thanks to the experience he gained at Western—both inside and outside the classroom.

"It's been a longtime dream of mine to work at an auto manufacturer—specifically FCA," Durham says. "I'm extremely excited that this dream has been realized, and I'm proud to represent WMU in the industry." 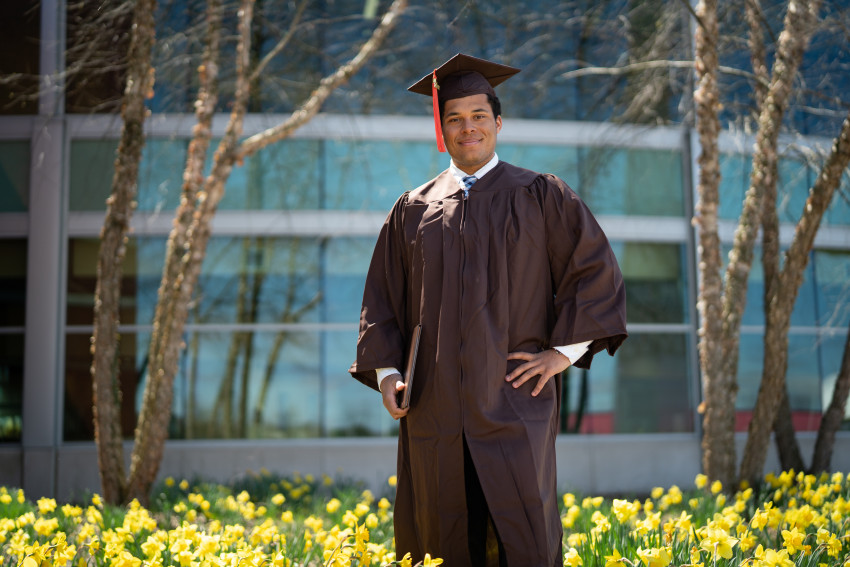 Durham stands in front of Floyd Hall in his cap and gown.