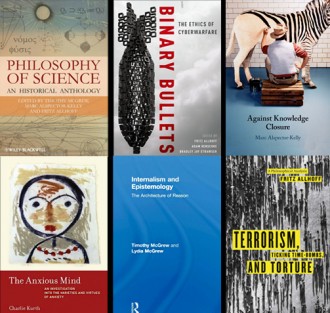 The faculty in the Department of Philosophy at Western Michigan University are actively engaged in research across four broad areas: Metaphysics & Philosophy of Mind; Epistemology & Philosophy of Science; Theoretical & Practical Ethics; and Teaching & Pedagogy.

The Philosophy Department is also proud of the research accomplishments of its graduate students. Each year, WMU grads present their work a professional and graduate philosophy conferences around the country.

Fritz Allhoff: Fritz works in applied ethics, social and political philosophy, and philosophy of law. A central question that animates his research asks when we’re allowed to do (otherwise) bad things in order to prevent worse things from happening. This question gains traction across a range of domains, including the ethics of war, affirmative defenses in criminal law (e.g., necessity and self-defense), punishing the innocent, and so on. With a background in both philosophy and law, Fritz favors interdisciplinary and empirical approaches to philosophical problems. Recent books include Terrorism, Ticking Time-Bombs, and Torture (University of Chicago Press, 2012) and Binary Bullets: The Ethics of Cyberwarfare (Oxford University Press, 2016). Fritz was awarded the WMU Emerging Scholar Award—a university-wide research award—in 2016 and has received over $1,000,000 in funding from the National Science Foundation.

Marc Alspector-Kelly: Marc’s research interests include the history of analytic philosophy, metaphysics, the philosophy of science and epistemology. His most recent research centers on the closure principle in the theory of knowledge (the idea that a person who knows P and recognizes that P implies Q also knows Q) and its relation to a variety of epistemological issues including skepticism, sensitivity and safety, warrant transmission, epistemic circularity, fallibilism, contextualism, reliabilism, and evidentialism. He takes up these and related issues in his book, Against Knowledge Closure (Cambridge University Press, 2019). He has also published work on meta-ontology, the realism debate in the philosophy of science, and the philosophy of perception.

Charlie Kurth: Charlie has interests in ethics, moral & philosophical psychology, emotion theory, and metaphysics. A unifying theme of his work is that research in ethical theory, moral psychology, and the philosophy of emotion can be productively informed by empirical inquiry in the cognitive and social sciences. His book The Anxious Mind (MIT, 2018) investigates the cognitive science of anxiety and its implications for questions about value, agency, and virtue. His current work focuses on two fronts: metaethical questions about the nature of moral objectivity and more normative questions about emotions and their role in moral development and agency.

James Martin: James has research interests in the philosophy of mathematics and logic, where he has recently been focused on topics like explanation, coincidence and purity of methods; the later Wittgenstein in relation to those topics and as a guide to philosophical methodology; and ethics, primarily as inspired by the ancients.

Timothy McGrew: Tim’s research focuses on formal epistemology, probability theory, the history and philosophy of science, and the philosophy of religion. He has written two books: Internalism and Epistemology: The Architecture of Reason (co-authored with Lydia McGrew; Routledge, 2007) and The Foundations of Knowledge (Littlefield Adams Books, 1995). In 2014, Tim was awarded at grant from the John Templeton Foundation for research on belief in Special Divine Action.

David Paul: Dave is a faculty specialist who has been actively involved in service and teaching for more than two decades. His research focuses on pedagogy and this work informs his approach to teaching and service. He, for instance, mentors several graduate teaching assistants in the department, facilitates trainings for graduate student teaching assistants across campus, and runs pedagogical workshops for faculty at all levels. Additionally, Dave is currently serving as the department's undergraduate advisor and faculty senator, is a faculty fellow for the Office of Faculty Development, and serves on numerous college- and university-level committees and learning communities. His undergraduate teaching has focused on both biomedical ethics and general education philosophy courses.