Sandy Hook gun control ad
The tender story telling from the relatives of those lost at Sandy Hook reveals a chilling and overlooked surprise ending. This piece is an effort to teach us what to watch for when it comes to kids in need. 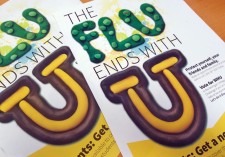 Flu Shot Challenge
Western Michigan University is competing with 16 other state school to get the most people vaccinated this fall. The "Flu ends with U" campaign aims to specifically target uninsured or underinsured students. To learn more about where to get your flu shot and how to vote please click on the link below

American Public Health Association and Social Justice
Sir Michael Marmot of University College London talks about the Social Justice of Public Health. Why people get sick in the first place has a lot to do in part with social inequities; where you are born, how you grow, live, work and age along with access to good health care are all key. These social determinates often leave the less fortunate behind.

Why are American Health Care Costs so High?
An amusing comparison in which the complicated reasons why the United States spends so much more on health care than any other country in the world, and along the way we see some surprising information, including a fact Americans spend more of their tax dollars on public health care than people in Canada, the UK, or Australia.

Police are asked to Solve too many Social Issues
With the recent years long string of incidents between police officers nationwide and black men on American streets one Police Chief says his officers are being asked to step-in and solve to many of our nations societal ills.