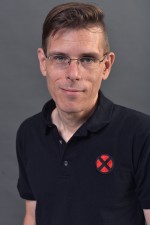 By appointment via email.

Kevin J. Wanner is a professor in the Department of Comparative Religion at Western Michigan University.