Western Michigan University's ROTC program celebrated its 50th anniversary in fall 2000. In 1948, Dr. Paul Sangren, president of the Western Michigan College of Education, and Representative Paul W. Shafer, from Michigan, started negotiations to have an ROTC unit established. The request was honored, and the Bronco Battalion was established on May 3, 1950. The first ROTC classes began in fall 1950 with more than 500 students enrolled.

The first professor of military science was Colonel Curtis L. Varner, Quartermaster. The Military Science Department was placed under the School of Applied Arts and Sciences, then part of the College of Engineering and Applied Sciences. It is now a department of the Haworth College of Business.

The ROTC program started as a quartermaster unit, and all graduates were commissioned as Quartermaster officers. By 1954-55, the program had more than 800 students and was converted from a Quartermaster to a general military science program that could produce officers for all branches.

By 1956, selection for the program was competitive with advanced courses selected by the PMS and the president of the college. Advanced course students were paid $27 per month and given a draft deferment. In 1957, the Battalion moved into Oakland Gym. In 2001 they moved to their current location on East Campus.

In 1965-66 there were major changes; flight training was offered during the advanced course; basic camp was created for students who had not participated during their first two years; subsistence allowance rose to $40; three-, two- and one-year scholarships were available to qualified cadets. Subsistence rose to $50 in 1968. In 1971, four-year scholarships were available. In 1972, the allowance rose to $100 and again in 1995 to $150. In Oct 1999, it rose to $200. It changed again in 2001, they are now by levels.

During the height of the Vietnam War and the civil unrest it induced in this country, the ROTC building was burned. In the early morning hours of May 5, 1969, arsonists broke into ROTC offices in Oakland Gym and set three separate fires. The fires were discovered early and extinguished, causing only minor damage; the greatest loss being lesson plans.

In 1973-74, the program underwent major changes. The university no longer exempted ROTC students from physical education; they created a military fitness class instead.The draft ended and women were admitted into the program. In the midst of these changes, enrollment dropped to an all time low of 50. In January 1974, Cadet Cynthia Gonyea became the first female cadet commander of an ROTC unit in the United States.

To make way for the Seelye Center, Army ROTC moved out of Oakland Gym in 2001 to a new home in the Activity Therapy Building on the Oakland Campus near the Kalamazoo Psychiatric Hospital and the College of Health and Human Services.  Throughout the beginning of the new century the program saw growth despite the United States' growing involvement in Iraq and Afghanistan.  2009 saw the largest commissioning class since the end of the Vietnam War and the abolishment of the draft in 1973.  The program continued to produce large numbers of new officers throughout the teens.

In 2007, through the College of Aviation, Colonel (Retired) Richard Sperling (class of 1965) created the first endowed scholarship at WMU intended specifically for Army ROTC Cadets.  His scholarship is awarded to Army ROTC Cadets pursuing aviation.   In 2008 an endowed scholarship for Army ROTC Cadets was created by the family of Chief Warrant Officer Four (Retired) Herbert Kenz, a Wall of Fame member and alumnus of the class of 1952.  And in 2012, following his death in Afghanistan the previous year, friends and family of Captain Drew Russell (class of 2008) created an endowed scholarship in his name.  Finally, in 2013 the Alumni and Friends of ROTC Cadet Fund was established.  This endowment fund generates revenue that may be used at the discretion of the Professor of Military Science for the benefit of cadets. 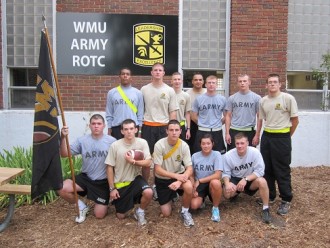 2018 saw big changes for ROTC at WMU.  The biggest impact to students was the creation of the WMU FIRST (Funding Initiative for ROTC Scholarship Transformation)Scholarship.  This scholarship, funded by WMU, pays for the first year's tuition for any Three Year Advanced Designee (3AD) Scholarship recipient who attends Western Michigan University.  This was a huge commitment by the university demonstrating their esteem for the quality of students brought into this school by our program.  The second major change was a relocation of the department into the Campus Services Building.  Pending demolition of the Activity Therapy Building, new construction was added to the existing Campus Services Building to house Army ROTC and as soon as classes were complete in May 2018, the department moved.

Since its inception, ROTC has commissioned countless qualified and motivated graduates as second lieutenants in the United States Army. These officers have served and are presently serving proudly in a wide variety of responsible positions on active duty in the United States Army or in the Army Reserve and National Guard. The ROTC success story can be seen in these soldier citizens and citizen soldiers who serve their country proudly.