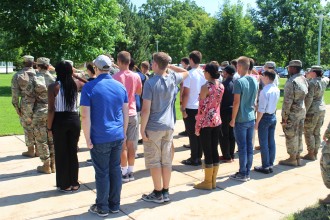 Western Michigan University's Department of Military Science and Leadership has several existing endowments to which anyone may make additional contributions. For any endowment, the amount you contribute is never touched and remains in the endowment in perpetuity. This is called the corpus. These funds are combined with other funds within the University and invested. Each year the department is able to draw funds from the interest and earnings made by the corpus. As the corpus grows, the amount the department can spend each year grows. Our current endowments are as follows:

Give to the Alumni and Friends of ROTC Cadet Fund

This scholarship is awarded annually to a cadet who is a full-time junior or senior, maintains a minimum GPA of 3.0, and exhibits the following character traits and commitment to the principle of balance in one's life: positive attitude toward others and the future; balance in life related to family, friends, work, education, athletics and the arts; and embodiment of the Army values.

Give to the Herbert W. Kenz Army ROTC Cadet Scholarship

This scholarship is awarded annually to a cadet who maintains a GPA of 3.25, is involved in extracurricular activities and demonstrates a desire to become an Army officer. Preference will be given to former non-commissioned officers.

Give to the Captain Drew Russell Memorial Scholarship

This endowment is dedicated to Army ROTC cadets, but maintained by the WMU College of Aviation. The scholarship is awarded annually to a contracted cadet who is majoring in aviation flight science or who has expressed a strong interest in taking flight training at WMU and who has maintained a GPA of 2.5 or above.

Give to the Colonel Richard A. Sperling Distinguished Service Cross Scholarship

If you would like to create a new endowment or make other gifts to the department, we would be happy to talk to you about your passion to support and the legacy you can leave at the Bronco Battalion

If sending a check, please note in the memo field the name of the fund (if any) to which you would like it applied. If no fund is designated it will go into the Alumni and Friends of ROTC Cadet fund.