A great resource for ISM students 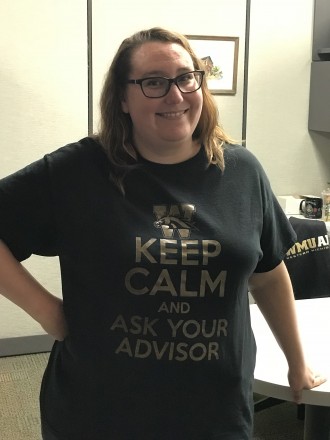 ISM academic advisor and program manager Alyshia Garrett, B.B.A.’12, assists students with curriculum planning from orientation to graduation. She is always ready to help them navigate everything from the competitive application process to class schedules and graduation audits.

After graduating from WMU in 2012, Garrett quickly realized the finance field was not a good fit for her. While planning a new career path, she recalled how much she loved working in the residence life office as a student and began considering looking for a position at WMU. Her first job involved working for Bronco Express helping students with financial aid-related questions, and after that she joined the Office of Admissions staff. From there she moved into an office associate position in alumni relations and marketing for the Haworth College of Business. One year later, the posting for a program coordinator and academic advisor for the ISM program caught her eye. Academic advising had always been intriguing to her because of a love of puzzles, which, as she points out, course scheduling can definitely be sometimes, and helping people solve problems. She assumed the role in January 2015.

Garrett’s favorite part of advising is helping students solve problems. In her experience the ISM students tend to be planners, so they work with her to figure out course schedules instead of simply asking what they should take in a given semester.

Garrett sees relationship building and planning opportunities as two of the biggest advantages of having an advisor dedicated to the program. Since Garrett meets with students from the first time they express interest in ISM all the way through graduation, she is able to get to know them and make recommendations based on that relationship. She is also able to keep close track of students since she has a set population.

How the ISM program helps students reach their goals

The ISM program is very hands-on. Students get many opportunities to apply what they learn in the classroom through the Applied Six Sigma Problem-Solving course and their involvement in Bronco Force and APICS, the student organization related to ISM. Faculty and staff are very connected and available to the students, and it is rare for a student to graduate from the ISM program without being on a first-name basis with at least one of them.

Advice for succeeding in the ISM program

Students should get involved strategically, meaning they should get involved but not overextend themselves. Garrett encourages them to take some time the first year to learn how to balance everything. Also, students should visit the ISM advisor every semester to make sure class schedules and plans are still accurate. Registration happens in October for the spring semester and in March for fall, so those are the busiest months. Plan ahead and come in September or February. Garrett looks forward to helping each ISM student reach their goals.