Mission of the Soga Japan Center

The Soga Japan Center at Western Michigan University commits itself to making fundamental advances in the knowledge of Japanese history, culture, business, science and technology. In so doing, it serves as a generative force in international education. The objectives of Center are to:

History of the Soga Japan Center

Western Michigan University’s links to Japan date back more than 50 years, with WMU’s first Japanese alumnus earning a graduate degree in psychology in 1955. In 1961, the first academic partnership with a Japanese university occurred when Keio University sent a group of 66 students and three professors to WMU for a Summer Institute program. Currently, more than 500 WMU alumni reside in Japan.

More recently, efforts on both sides of the Pacific Ocean have resulted in the establishment of WMU’s Michitoshi Soga Japan Center. For more than 35 years, Dr. Michitoshi Soga, WMU professor emeritus of physics, worked tirelessly to establish a network of connections in West Michigan for individual visitors, as well as for businesses and Japanese partner universities and colleges. The Soga Japan Center is one of a number of centers that exist under the auspices of WMU's Haenicke Institute for Global Education. The Haenicke Institute was established in 1998 by the WMU Board of Trustees to promote globalization and internationalization of the academic domain of Western Michigan University.

The center also offers presentations on WMU’s campuses as well as in K-12 schools, libraries, community centers, and other locations throughout Michigan. 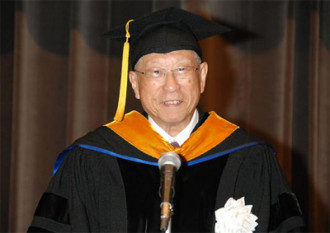 Dr. Michitoshi Soga began his career at WMU in 1968 as a professor in the Department of Physics. In addition to his significant scholarly accomplishments, he dedicated his career  to working with students and community members to deepen understanding between Japan and the United States.

Dr. Soga retired from teaching in 1993, becoming an emeritus professor, then served as an adviser for Japanese relations through WMU’s Office of  International Affairs until 1996. In 2005, the WMU Board of Trustees honored Dr. Soga by establishing this center in his name to support research in Japanese studies and community outreach.

Learn more about Dr. Soga in this Memorial Booklet.