David Rozelle: The Mentor You Hope to Meet in College 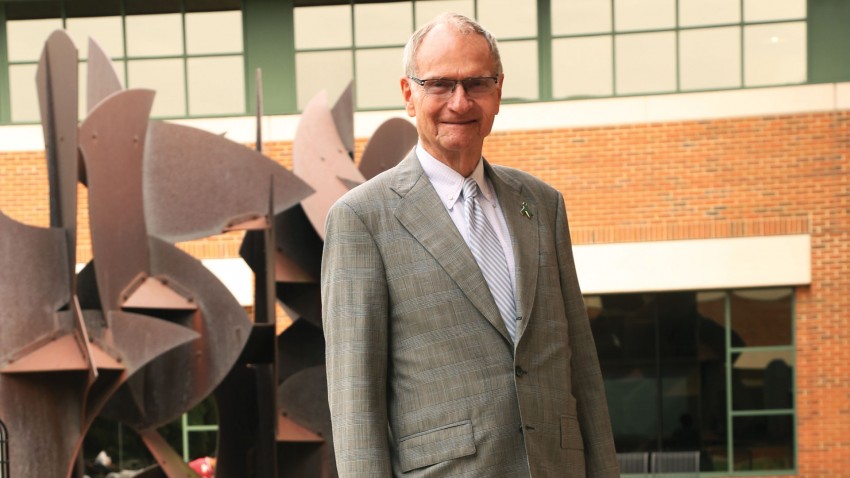 David Rozelle, M.S.A.’75, shares reminiscences from his 38-year career at WMU. He served as associate professor of accountancy, receiving several awards for teaching and service.

Rozelle found that there are many things to learn at WMU.

The M.S.A. was my third degree, after two degrees in history and a failed attempt to become a Ph.D. in history. I had taken many economics courses in my long career as a student. When I say long career, I led off with a nine-year journey to a bachelor’s degree. I am told that it isn’t a world record, but it’s up there. It was nearly impossible to find a job in the liberal arts in the early 70s. I looked for something where I could make a living, and I did this with great regret, because it seemed that I was fated to leave the university environment. You see, I fell in love with college—so much energy, so much intelligence and so much conviction that one could change the world for the better.”

Ultimately, Rozelle realized his aspiration to remain on a college campus, spending 50 years of his life pursing his education and inspiring his WMU students.

“Not long after I began teaching in the business college, I became faculty advisor for Beta Alpha Psi. Beta was one of the best things that ever happened to me. This organization would become the center of my career. The hundreds of students I met through the organization are my network.”

Despite some sleepless nights, Beta Alpha Psi achieved Superior Status in 23 out of the 25 years Rozelle was chapter advisor.

“I have many great memories. I recall attending a wedding of a former Beta Alpha Psi student on an island off the coast of France. I watched members of my network run on a 200-mile course in Northern California as part of a team to raise awareness for organ donation. Our graduates hold leadership roles in firms all over the world.

The best days were always just before the students left—graduation.

Commencement is magic. It’s the only place in life where I have witnessed so much pure happiness. And whether it is your first graduation ceremony or your thirty-first as a faculty member, for the graduates, it is new and exciting.

Of course, for me, there was always a bit of sadness too. The students who I had come to cherish were leaving. A senior professor once said to me, ‘Don’t worry, there’ll be a whole new group in September.’ That’s the joy of this job, you miss them when they leave, but you get to start over again and again.”

When Rozelle began to “feel his age” in a particular faculty meeting, he decided to retire.

“My peers advised me that retirement is about moving to where your grandchildren live and playing golf. I hate golf, and I have no children, so I work in two fields of service, organ donation awareness and fighting hunger in Kalamazoo.”

Rozelle received a heart transplant in 2001. Since then, he has helped to sign up more than 3,200 people on the donor registry. He plays an equally important role in hunger prevention in Kalamazoo, donating countless hours of his time. He remains in touch with many of his former students.