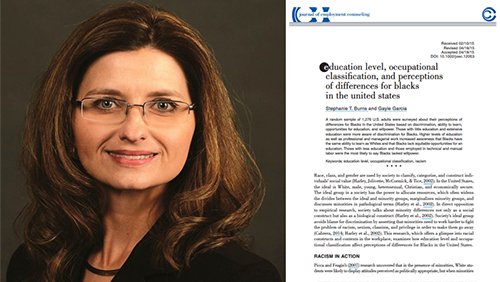 Dr. Stephanie Burns and a graduate student from the Clinical Mental Health Counseling Program, Gayle Garcia have just published a journal article in the Journal of Employment Counseling.

Race, class and gender are used by society to classify, categorize and construct individuals’ social value (Harley, Jolivette, McCormick, & Tice, 2002). In the US, the ideal is Caucasian, male, young, heterosexual, Christian and economically secure. The ideal group in a society has the power to allocate resources, which often expand divides, marginalizes minority groups, and discusses minorities in pathological terms (Harley et al., 2002). In direct opposition to empirical research, society talks about minority differences not only as a social construct, but also as a biological construct (Harley et al., 2002). Society's ideal group avoids blame for discrimination by asserting that minorities need to work harder in order to fight the problem of racism, sexism, classism, and privilege in order to make them go away (Cabrera, 2014; Harley et al., 2002). This research examines how education level and occupational classification affects perceptions of differences for Blacks in the US, which offers a glimpse into their surrounding racial constructs and contexts at work. A random sample of 1,276 U.S. adults were surveyed about their perceptions of differences for Blacks in the United States based on discrimination, ability to learn, opportunities for education, and willpower. Those with little education and extensive education were more aware of discrimination for Blacks. Higher levels of education, as well as professional and managerial work, increased awareness that Blacks have the same ability to learn as Whites and that Blacks lack equitable opportunities for an education. Those with less education and those employed in technical and manual labor were the most likely to say Blacks lacked willpower.

Read the full article at the Wiley Online Library.