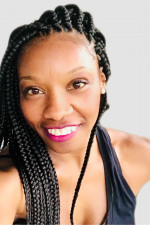 Monique Haley, Assistant Professor of Dance and African American and African Studies, holds a Master of Fine Arts degree in Dance from The University of Wisconsin-Milwaukee (2018) and a Bachelor of Fine Arts degree in performing arts, specializing in jazz dance from The University of the Arts in Philadelphia, PA (2001). Her research centers on African cultural values, ethos, and the importance of cultivating ritual in contemporary jazz dance pedagogy. Her chapter entitled, Cultivating African Diasporic Ethos and Cultural Values in Contemporary Jazz Dance, will feature in a new scholarly textbook, Rooted Jazz Dance: Africanist Aesthetics and Equity in the 21st Century, by editors Lindsay Guarino, Carlos Jones, and Wendy Oliver later this year centering the Diasporic Encounter Method (DEM)—a working methodology devised by Haley to focus the Africanist perspective in the classroom, rehearsal, and creative process. In addition, Monique has been invited to the prestigious American Dance Festival (ADF) to be a part of their summer 2020 dance faculty. Haley will use DEM as a foundational teaching tool to inspire an authentic ethos and connection between participants in their daily jazz practice. Pending COVID-19 restrictions, she now looks forward to bringing this opportunity to fruition virtually in summer 2021.

Notably, her choreographic work, Culture Loop, in collaboration with Chicago's Cerqua Rivera Dance Theatre (CRDT), was recently recognized by The Black Album Mixtape, a national and international platform for social and racial justice for African American artists of all mediums, created by Golden Globe award-winning actress, play-write, and activist Regina Taylor. While tending to her work here at WMU in the CFA with the School of Theater and Dance teaching Jazz pedagogy and musical theatre performance, Monique choreographs and teaches dance nationally and is the Resident Choreographer for Cerqua Rivera Dance Theatre in Chicago, IL. She has set works, ROOT: mwanzo wa mwili ni roho (2018), Culture Loop (2020), and is preparing to begin a two-year development of an evening-length immersive show experience, Soul Remedy, to debut the 2022-2023 season.

Monique honors nine memorable years with the former River North Chicago Dance Company as the first African- American female to join the company in 2001. She has also been a member of the Bermuda Dance Company and the Eleone Dance Theater of Philadelphia.

As a dance educator, Monique has been a guest teacher in 2016, 2017, and 2019 ACDA East Central Conferences. In Chicago, Monique was a frequent teacher for the former Lou Conte Dance Studio, the Visceral Dance Center, and the Joffrey Academy of Dance Trainee Program. Monique participates yearly as part of the Chicago Dance Connection Jazz Camp Faculty and has taught for the former River North Chicago and Inaside Dance Company Summer Intensives. She has set choreography for high school, collegiate, and professional companies on a national scale.

In musical theater, Ms. Haley was a dancer and ensemble member in the Disney musical The Jungle Book, directed by Mary Zimmerman and choreographed by the Tony Award-winning Christopher Gattelli. In Chicago's regional theater seen, she was the dance captain/ensemble member, and associate choreographer, for the Drury Lane Oakbrook Theater's production of Aida and the associate choreographer of Paramount Theater Aurora's inaugural production of My Fair Lady. Additional theater credits include HAIR, Joseph, and the Amazing Technicolor Dreamcoat (Mrs. Potiphar). Chicago (June), On the Town, amongst others.

Monique has choreographed for American Midwest Ballet, Cerqua Rivera Dance Theatre, Nomi Dance Company, Visceral Dance Company, the Chicago Repertory Ballet Company, and the collaborative works with the Chicago - based companies Muntu African Dance Company and DanceWorks Chicago. In 2010, she created the entertainment segment for the Danny Clark Foundation Annual Celebrity Gala: Le Moulin Rouge, a Night in Paris, to help raise money to promote advocacy, education, and outreach programs to those in need. Haley's choreography has also featured in Dance for Life Chicago; the annual aids benefit concert. In 2015, she premiered a collaborative theatre/dance piece, Still Life with Drumming, at the Myron S. Szold Music and Dance Hall at The Old Town School of Folk Music. Collegiate commissions include work for the former Marygrove College, Western Michigan University, and the University of the Arts, to name a few.

Monique's career and creative works are recognized in such publications as Dance Spirit and Dance Magazine. In addition, Haley is one of the first artists to receive a 3Arts Award (2012) for choreography and dance and her contribution to the arts community in Chicago.

Currently, Monique passionately educates students teaching jazz dance curriculum and working with the musical theater performance students in the WMU's College of Fine Arts and looks forward to working in her newly appointed faculty position with The Institute of Intercultural and Anthropological Studies in the Department of African American and African Studies.