In 2011, Western Michigan University's Department of Dance developed the National Great Works Choreography Competition to identify and promote emerging choreographers and bring their work to campus. A dance faculty committee narrows the field of submissions to three finalists based on the following criteria: movement innovation, choreographic structure, and subject matter. Works by the three finalists are then screened and voted upon by students, faculty, and members of the community. The winner of the competition is commissioned to create an original work for the WMU dance students that will be performed in the department’s Gala Concert at Western Michigan University, may be chosen to represent the department in regional ACDA adjudication and may also be performed in the department’s NYC showcase.

Tsai Hsi Hung graduated from Taipei National University of the Arts in 2010. In 2009, she traveled to Australia as an exchange student for the Dance at Queensland Technology University Dance Department. She has worked with the Australian Dance Theater, Tasdance, Expressions Dance Company, and Chunky Move Dance Company Dancers.

In 2020, Hung received a Choreography Fellowship from the New Jersey Council on the Arts. Shortly after, Hung’s work was selected by the Joffrey Academy of Dance for their Spring 2020 Winning Works performance in Chicago. Hung also got invited to Taipei National Dance Theater to perform New work this July 2020.

In 2012, Hung wrote the choreography for the Beijing TV show Passion for Dance. Meimage Dance commissioned her to choreograph a solo piece entitled Bluebeard, which Hung performed throughout Taiwan in the summer of 2016. Her choreography was also featured at Baruch Performing Arts Center’s REVERBdance series in 2017.

In June of 2018, the MET Dance company performed Hung’s work IO for 12 dancers at the Miller Outdoor Theatre in Houston, Texas. In 2019, Hung’s piece DOUBLEND was performed at the NU VU Festival at the LaGuardia Performing Arts Centre, Martha Graham Studio Theater and NYU Skirball Center. Her most recent work, Brushstroke- X2, was performed at the 2020 APAP Peridance Showcase in New York.

Hung teaches the open class at the Peridance Capezio Dance Center and is the director of the Queens Ballet Center/QBC Company in New York.

BAIRA / MVMNT PHLOSPHY is a Detroit based physical dance-theatre company. Born circa 2014, out of the collected and ongoing research of collaborative duo Shaina and Bryan Baira. The company’s choreographic work is known for their rigorous and athletic movement vocabulary, highly calculated partnering technique and a deeply personal theatricality. BAIRA productions revolve thematically around relationships and life, seeking to inspire consideration for the potential of our human experience. Shaina and Bryan began working together in 2014 when their first collaboration, "Bench Duet", was selected as the DanceNOW at Joe's Pub "Audience Choice Award" Challenge Winner. From 2015-16 they were East Village Dance Project (NYC) Company in Residence and received the Laban Institute of Movement Studies - Atelier Award. From 2016-18 Shaina and Bryan were chosen to participate in Pentacle's 2-year research and artist capacity-building program, "Administrative Resource Team (A.R.T.). In 2017 they were awarded a creative space grant by The Alliance of Resident Theatres/New York and were Lower Manhattan Cultural Council Workspace Program Recipients for the 2017-18 season. In Summer 2018, Shaina and Bryan were invited as the inaugural Dance Artists in Residence at The Wassaic Project as well as invited to Participate in The Watershed Laboratory 2018 at Mt. Tremper Arts. Shaina and Bryan relocated to Detroit in July 2018 and in collaboration with Wayne State University, have launched 'BAIRA Intensive Detroit' - Summer and Winter International Training Intensives for professional/pre-professional dancers. Since their relocation, BAIRA's choreographic work has been presented at the Museum of Contemporary Art Detroit, The Bonstelle Theatre, Andy Arts Center, Light Box Theater and the Allesee Studio Theatre. As of March 2019,BAIRA has officially joined forces with the Maggie Allesee Department of Theatre and Dance as Resident Company of Wayne State University, and is fiscally sponsored by the Music Hall Center for the Performing Arts in Detroit. Shaina Baira was born and raised in Victoria, Texas and received her BFA in Dance at the University of Iowa. She completed her certification as a Movement Analyst at the Laban Institute of Movement Studies, and completed studies in religion and philosophy at the New York All Faiths Seminary International. She has performed and taught in Haiti, Israel, Italy, the UK, Belgium, and through the USA. She is an ordained Interfaith Minister and member of The Feath3r Theory. Currently, Shaina is an Adjunct Professor of Dance at Wayne State University, is a Detroit based Wedding Officiant and actively serves as a mentor for young dancers. Bryan Baira is originally from Carleton, MI, Bryan is a graduate of Wayne State University with a B.F.A in dance. He has performed and taught around the world in places such as Colombia, South Korea, Turkey, Tajikistan, and Armenia; as well as throughout NYC and the U.S. He has danced with Nicholas Leichter Dance, Brian Brooks Moving Company, David Dorfman Dance and ThirdRailProjects. Bryan is an active sound designer/musician and is a member of The Feath3r Theory. Bryan is honored to have been selected as one of Dance Magazine's 'Top 25 to Watch' for 2013, and is also an Adjunct Professor of Dance at Wayne State University.

New York-based choreographer and performer, Brendan Duggan, was selected as the fourth NCC winner in spring 2017. Duggan was a Co-Founder and Co-Director of LoudHoundMovement (LHM), a contemporary dance collective based in Brooklyn. Mr. Duggan created "HAUNT" in close collaboration with fifteen dance students to music by Losciil. “HAUNT” represented the department at the regional ACDA adjudications where it was selected for performance in the conference’s final Gala Concert. It was also performed as part of the department’s inaugural NYC showcase at Gibney Dance.

In spring 2015, Montréal-based dancer and choreographer, James Gregg, was selected as the third NCC winner. Gregg was the recipient of the 2015 Princess Grace Choreography Fellowship Award and the winner of Ballet Austin’s 2014 New American talent choreographic competition. Gregg created “Out of the Dark” for six WMU dancer students to an original sound scape by Jordan Moser.

New York-based choreographer and performer, Gabrielle Lamb, was chosen as the competition’s second winner in spring 2013. Lamb was a winner of the 2009 National Choreographic Competition of Hubbard Street Dance Chicago and the 2013 Genesis International Choreographic Competition of Milwaukee Ballet. Lamb created “Ritournelle” (2014), a work using a compilation of musical selections from “Ritournelle” by Colleen. 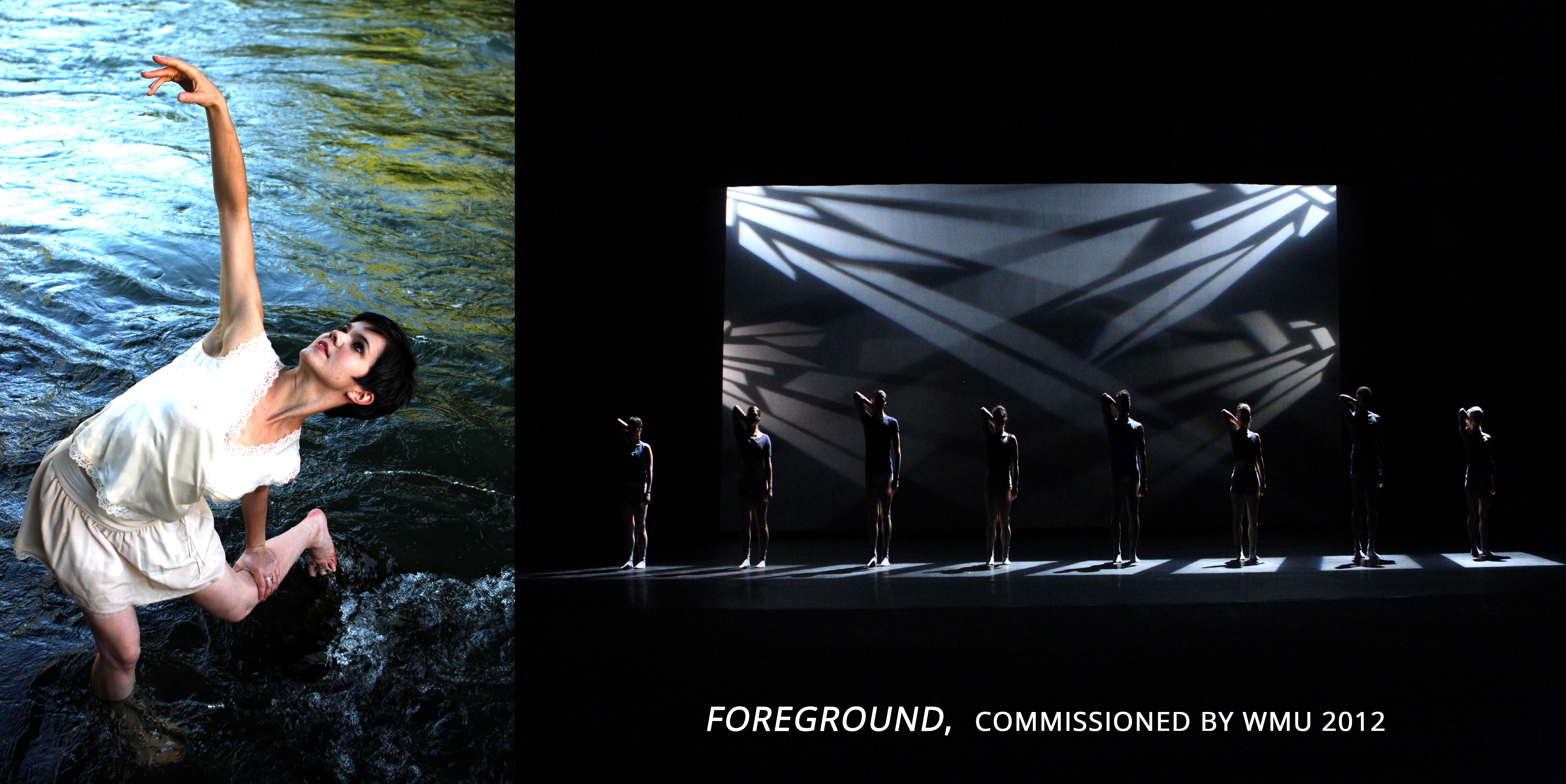 The inaugural winner of the National Choreography Competition was Lauren Edson. Edson danced with a number of companies, most notably Trey Mclntyre Project, and won the Northwest Dance Project’s first annual Pretty Creative’s International Choreographic Competition in 2009. Edson came to WMU in Fall 2011 and created “Foreground” (2012) to music by Dustin O’Halloran and Grizzly Bear. After its premiere in the Gala Concert at WMU, “Foreground” was selected to represent the department at the American College Dance Association East-Central Conference and was then selected to represent the region at the ACDA National Festival at the Kennedy Center in Washington, D.C.