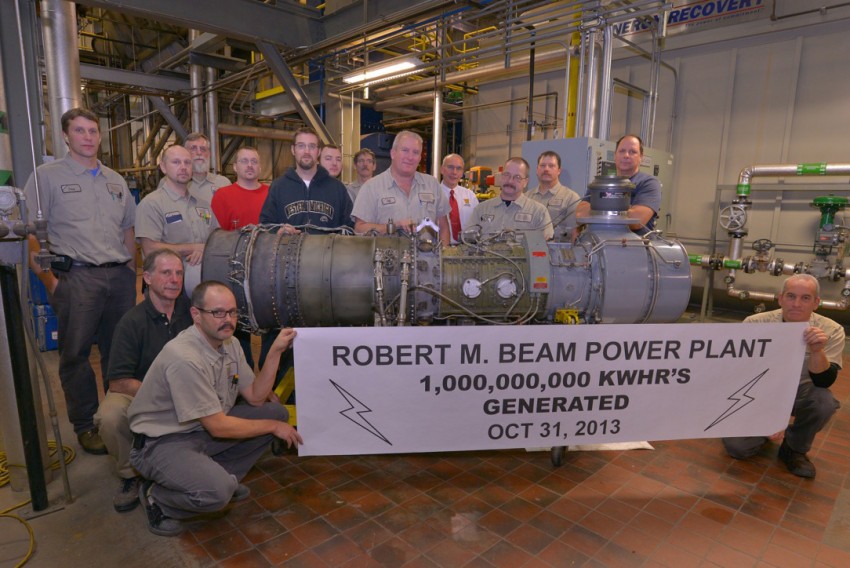 The crew at Beam Power Plant upon reaching 1 billion kilowatt-hours.

The following is excerpted from an article about the Michigan State Employees Association bargaining unit at Western Michigan University that appeared in the January 2008 issue of the its monthly newsletter describing the achievements of this unique unit and how they achieved their results:

"Our 15-member bargaining unit was instrumental in re-organizing and re-structuring the power plant at WMU for maximum efficiency and fuel savings," said Mike Walden, Chief Operating Engineer. This is how they did it: The bargaining unit had been organized into a rigid structure with little flexibility regarding coverage for unscheduled absences. In addition, there was a pronounced distinction between who operated the equipment and who repaired and maintained it. "We had to reorganize and become a unified group," said Walden, "and that meant some downsizing." He emphasized that nobody as was displaced. An early retirement package was offered to five of the most senior employees. "They got a good deal and the remaining employees got their training and travel paid for.

"The crew's jobs were tied to this program," Walden continued. "Our philosophy was that if we had fewer employees, then the skill level had to be higher." A cross-training program was developed that essentially eliminated the job distinctions, and policy modifications regarding absences were made. The first step in the cross-training program was to have the entire staff at the power plant licensed as stationary engineers through the National Institute for the Uniform Licensing of Power Engineers. "We then sat down with management and developed job performance measures for each task category," said Walden. The job performance measure were to be completed by each employee by demonstrating competency in each task under the supervision of a bargaining unit member. There were a total of 82 operational job performance measures, 49 general maintenance measures and 67 advanced maintenance measures.

A third step in the cross training development process was designing and implementing a registered apprenticeship program for the UTL classification. "We worked with the Kellogg Community College Regional Manufacturing Technology Center in Battle Creek to develop a work process requirement and formal education curriculum," said Walden. In order to fit into the organizational chart at the expiration of the existing collective bargaining agreement, each employee had to meet certain criteria and demonstrate proficiency. The motivation to fulfill these requirements was that pay raises were tied to advancement from prior job classifications into the new ones. "Sick time and overtime were big issues which caused a lot of resentment and morale problems," said Walden. "There were two guys on every shift and if the next shift didn't show up, they couldn't leave until they were relieved. Sometimes, guys were working 16-hour shifts." According to Jeff Landers, Utility Specialist Journeyman and Michigan State Employees Association chief steward, this situation rarely happens anymore due to the cross-training and improved attitudes. "If someone is absent now, there are three guys waiting in line to take their place."

As a result, the use of overtime to staff the power plant dropped considerably—from over 6,000 hours per year in 1998-99 to less than 2,000 hours in 2002-03. "We recently saved both time and money by being a part of the installation of a new boiler unit," Landers noted. "We saved $100,000 and had the equipment start-up after construction done in less than a week. It would have cost much more to contract out the job and it probably would have taken a month to complete." In the past, any project in the plant was bid on by contractors—now the employees have the opportunity to do the work or partner with the contractor to do the job. "The guys are eager to do the work due to the apprenticeship program," said Landers. Initially, the employees were resistant to change," said Walden, "but once they saw that WMU was willing to meet us halfway, and once trust had developed with management, things began to turn around. When the employees became involved in the program, we saw a sense of ownership. Everyone started to believe in each other and the results were almost immediate."

Walden said that employees began taking pride in their work and then it was easy to develop efficiency. "It has made all the difference in the world."