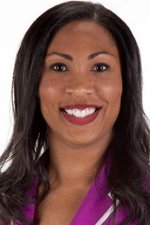 Shannon began her fashion career in the executive training program at Von Maur, a Davenport, Iowa-based department store chain. Shannon explains that she liked being a part of the training program because “it provided me with the opportunity to grow quickly as well as explore different career paths within the company.”  In less than one year, Shannon held four different roles at Von Maur: sales associate, assistant department manager, assistant store manager and buyer. Although buying was her original goal after graduation, she found that she most enjoyed the positions that allowed her to connect with people. So she left buying to take a position in Von Maur’s human resources department. As recruiting manager, she travels to college campuses throughout the U.S. to recruit students for Von Maur’s executive training and internship programs. During campus visits, she attends career fairs, leads information sessions and classroom presentations. Her job also includes developing and implementing the training program for interns and executive trainees at the store locations and the corporate office. What does she like best about her job? “I love that I have the opportunity to make an impact by selecting future store managers and buyers for the company. It’s rewarding to be entrusted to make such a big decision for the company.”

In addition to her merchandising major, Shannon credits her internship at Express and her involvement with M.O.D.A., the student organization for fashion students for giving her a competitive edge in the job market. Her advice to prospective majors is to “seek opportunities outside the city limits! Most students dream of working and living in large cities like Los Angeles and New York. I was one of them. During my search for a career in buying, I realized that there were opportunities in smaller cities where I never would have thought to look.”

Shannon’s job allows her to stay in touch with WMU and the fashion program. She regularly visits campus to attend career fairs, and speaks to students in classes and leadership seminars.  Shannon has recruited a number of WMU fashion graduates for the executive training program at Von Maur.

Back to alumni profiles