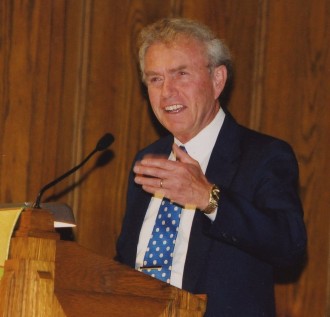 Dr. Maier taught at Western Michigan University for 51 years, making him the first faculty member at WMU to serve more than a half-century.  He was also campus chaplain for 39 of those years. A Lutheran scholar of the history of Christianity, historian, and novelist who has written scholarly works and 25 historical fiction and non-fiction books on Christianity and ancient historians, Dr. Maier is the former Russell H. Siebert Professor of Ancient History at WMU. He retired in 2011, and was previously a vice president of the Lutheran Church-Missouri Synod.

Three of his well-known non-fiction publications include In the Fullness of Time: A Historian Looks at Christmas, Easter, and the Early Church (1997, rev. ed.), which correlates sacred with secular evidence from the ancient world impinging on Jesus and early Christianity; Josephus: The Essential Works (1994, rev. ed.) is a translation/commentary on the writings of the first-century Jewish historian; and Eusebius: The Church History (1999) is a similar book on the first Christian historian. Dr. Maier’s most recent non-fiction work is an edited edition of Foxe’s Book of Martyrs (2016). His first book, A Man Spoke, a World Listened (1963), is a biography of his father, Dr. Walter A. Maier, who was the founding speaker of The Lutheran Hour radio program, which remains on the air to the present.

Dr. Maier has written fictional works in two genres: documentary historical novels and theological thrillers. A Skeleton in God’s Closet (1994) was a #1 national best seller in historical fiction. He has also written More Than a Skeleton (2003), a children’s book called Martin Luther: A Man Who Changed the World (2004), and a critical rebuttal of Dan Brown’s The Da Vinci Code, which he co-authored with Hank Hanegraaf, titled The Da Vinci Code—Fact or Fiction? (2004).

About four million Maier books are now in print in 120 editions translated into 20 languages as well as some 250 articles and reviews in professional journals and the general press.